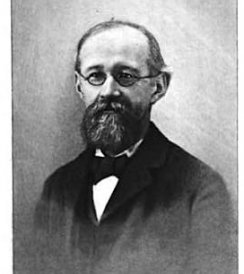 Charles Ammi Cutter (1837-1903) was Librarian of the Boston Athenæum from 1868 until 1892.  His lifelong objective was the development of a classification system comprehensive of all human knowledge yet serviceable to the general user.  Though he died before completing the final schedules of his Cutter Expansive Classification, his ideas nevertheless formed the theoretical basis for the Library of Congress Classification system.  Though not a household name like his contemporary and sometime rival Melvil Dewey, Charles Cutter’s influence on the organization of modern libraries is virtually unsurpassed.  He not only laid the groundwork for the Library of Congress Classification but also popularized the view that library catalogs ought to cross-reference subjects with authors’ names and titles, a practice almost taken for granted today.

The son of a Boston fish-oil merchant, Cutter embraced intellectual pursuits at an early age, entering Harvard College at fourteen and graduating third in his class. He attended Harvard Divinity School with the aim of becoming a Unitarian minister. During this time Cutter worked in the Divinity School library, eventually reorganizing the catalog to suit the organizational principles he was already formulating. In 1860 he joined the staff of the Harvard College library.  In 1868 Cutter became Librarian of the Boston Athenæum.

Reacting to perceived faults of his predecessors’ work, Cutter at once undertook a wholesale revision of the Athenæum’s catalog.  Published 1874-1882, the revised catalog included an open letter to the trustees which showcases Cutter’s acerbic prose:

The making of it [the old catalog], I have been told, was entrusted to several young men.  They were intelligent and industrious; one of them, at least, has since made his mark in the world; but they had never had any instruction cataloguing, probably had never been trained even in accuracy of copying.  Sometimes they took the title from the back of the book, sometimes from the title-page, sometimes from the half-title, and sometimes, apparently, from their own imaginations.  They omitted freely, of course, and they altered the order of words for the purpose of omitting, and of the words which they retained they abbreviated the greater part to the verge of unintelligibility. . . The result, if it had been printed, would have been one of the most remarkable catalogues ever issued.  Of course, working so rapidly, these writers got over a great deal of ground; the worse they worked, the more they did, leaving a larger crop of errors for others to uproot, and the nearer the catalogue seemed to completion the farther off it really was.

When finally completed, the elegance and utility of the revised catalog established Cutter as a rising star in his profession.  Impressed by his work, the U.S. Commissioner of Education asked Cutter to write an overview of his methodology for the upcoming Centennial Exhibition in Philadelphia.  The result was Cutter’s Rules for a Printed Dictionary Catalog (1876).  Cutter’s Rules went through four editions, serving as the go-to authority on the subject well into the twentieth century.  While attending the 1876 Exposition Charles Cutter and 102 other men and women signed a register establishing the American Library Association (ALA).  Cutter would contribute regularly to Library Journal, the official publication of the ALA, and serve as president from 1888 to 1889.  He also contributed literary reviews and bibliographical essays to the Nation, the New York Evening Post, and the North American Review throughout his career.

At the 1883 meeting of the ALA Cutter presented a paper entitled “The Buffalo Public Library in 1983.”  The sketch elucidates a utopian future for American libraries and famously anticipates the technological advances of the coming century, including inter-library loan, audio books, regional depositories, remote reference services and automated retrieval.   The full text of this prescient and humorous essay can be read here.

Cutter left the Athenæum in 1892.  After a brief tour of Europe, he was appointed Librarian of the Forbes Library in Northampton, where he would build a collection of 90,000 volumes almost from scratch, arranging the books according to his own Expansive Classification.  Cutter continued to refine the Expansive Classification system but died before completing its final schedules.  Today the Forbes Library and the Boston Athenæum both retain a version of it.  Charles Ammi Cutter died of pneumonia on September 6, 1903 and was survived by his wife Sarah Fayerweather Appleton and their two sons.

A landmark achievement in library science and considered the best of its kind for decades.

Not only an excellent biographical reference but an anthology of Cutter’s most significant writings.

Cutter’s treatise signaled how libraries would be cataloged in the twentieth century.
The Boston Athenæum has the earlier editions as well.