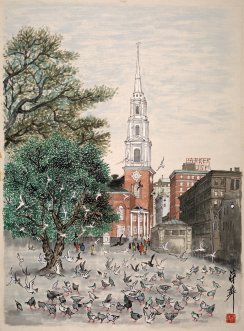 In 1933, Chinese government official Chiang Yee left his family and native province of Jiangxi to begin a new life as an artist and scholar in London. Surrounded by corruption and an angry civil war, Chiang had become disillusioned with the life of a magistrate, dreaming instead of time spent pursuing the arts.

When Chiang arrived in London, he managed to do just that: simultaneously teaching Chinese language at the London School of Oriental Studies, and exhibiting his Chinese-style watercolors. Though he created art in the traditional Chinese style, the subject matter was chiefly British. Chiang was inspired by his new environment. By representing thoroughly Western subjects using Eastern techniques, he managed to introduce the British public to a new perspective—an outsider’s perspective. This would become the theme of Chiang’s Silent Traveller books, a series recording a Chinese traveler’s impressions of cities all over the world. Scattered throughout are Chiang’s own poetry, sketches, and watercolor illustrations inspired by his surroundings. While books written by Westerners detailing their travels through the East were commonplace, the opposite was not, and Chiang managed to make an impression on many academics and art critics.

Whitehill and Chiang remained lifelong friends, and Whitehill was responsible for showing Chiang many of the sights in downtown Boston. In fact, members will recognize Whitehill’s name, among others, in the early pages of The Silent Traveller in Boston. In 1957 and 1959, the Athenæum exhibited Chiang’s drawings and watercolor paintings, which now reside in our Prints and Photographs department.

In 1975, Chiang returned to his homeland for the first time in 42 years. Having been unable to return to China due to World War II, the Chinese Civil War, and ensuing isolationism, Chiang was eager to be reunited with his family and witness the many changes that had taken place in his absence. He penned his observations in China Revisited: After Forty-Two Years, praising his country for its increased prosperity and education. Chiang died two years later in Beijing and is now buried near his hometown in Jiangxi Province.