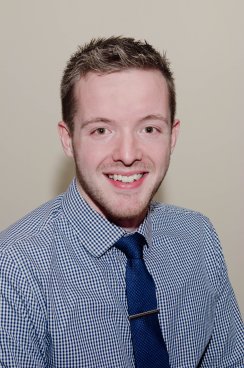 Tell us about how you first became interested in Americana History and about your education.
I have a BA, with First Class Honours, and a Ph.D. from the University of Stirling, Scotland. During my eight years at Stirling, I wrote an undergraduate thesis on medicine in Georgia and North Carolina in the Civil War and a doctoral dissertation on the origins of loyalism in New York City prior to the American Revolution, both of which are available in Stirling’s library. Before going to university, in 2006, I was interested in American history largely thanks to my father, who introduced me to Ken Burns’ s The Civil War, a nine episode documentary miniseries broadcast on PBS in September 1990. After I started my undergraduate studies, my interest only grew from there. In 2008, my father and I went on a tour of Civil War sites, visiting Antietam, Gettysburg, and Harper’s Ferry, among others. Toward the end of our mini-tour, I attended a small lecture by James McPherson, author of Battle Cry of Freedom (1988), at Princeton University.

What makes The Adams Papers exciting to you?
Working at The Adams Papers at the Massachusetts Historical Society is unique. Unlike most founding-era projects, a majority of the Adams documents we work with are held at the Society. David McCullough, author of the Pulitzer Prize-winning John Adams (2001), called the Adams Family Papers at the Society “a national treasure.” The collection comprises over 300,000 pages of manuscript material for the three generations of Adamses who were almost always a feature of public life from the American Revolution through the Geneva Arbitration of 1871–1872. The main body of the archive contains the public and private correspondence, diaries, and other papers of Presidents John Adams (1735–1826) and John Quincy Adams (1767–1848) as well as the diplomat Charles Francis Adams (1807–1886). Their wives, Abigail Adams (1744–1818), Louisa Catherine Adams (1775–1852), and Abigail Brooks Adams (1808–1889), recorded their own lives and those of their families in voluminous correspondences. Altogether, the collection offers multiple insights into nearly every aspect of early American history from the mid-eighteenth century onward. If something was happening, it’s likely that at least one of the Adamses had something to say about it!

Do you find a connection between the American Revolution and Scotland’s vote for independence?
Well, kind of. In the build up to the American Revolution many colonial Americans felt that Parliament didn’t represent their interests. When taxes were introduced after the French and Indian War (1754–1763), many believed they were having money taken out of their pockets without receiving the full benefits of parliamentary representation, thus the phrase “no taxation without representation.” In modern-day Scotland, many feel that Westminster doesn’t represent their interests, either. If you look at a political map of the United Kingdom and how the House of Commons is made up, Scotland is almost entirely yellow (for the Scottish National Party) and England is largely made up of blue and red (for the Conservative Party and Labour Party, respectively) with other colored dots across England, Wales, and Northern Ireland representing the Liberal Democrats, Green Party, DUP, Sinn Féin, Independents, and Plaid Cymru. Although there are many differences between then and now, the fundamental similarity is that many Scots don’t think Westminster represents their interests, largely because however its MPs vote, they can be easily outvoted. Thus you can have a situation where Scots feel marginalized.

What projects are you currently working on?
Obviously, volume 13 of the Adams Family Correspondence! The almost 300 letters in volume 13 were written between May 1798 and September 1799, a difficult time for President John Adams. From Quincy, a severely ill Abigail Adams wrote frequent letters to Philadelphia and received wonderfully readable responses from son Thomas Boylston and John’s newly appointed secretary and future founder of the Boston Athenæum, William Smith Shaw. The letters in volume 13 attest to John’s popularity in the wake of the XYZ Affair, but they also chronicle passage of the Alien and Sedition Acts and the Kentucky and Virginia Resolutions, which cloud Adams’s presidential legacy in spite of his successful navigation of the Quasi-War with France. Altogether, it’s a great volume! In particular, William Smith Shaw’s correspondence with Abigail Adams and Thomas Boylston Adams is particularly interesting. Outside of the Adams Papers, I am also revising my dissertation for publication and working on an edited volume on the Revolutionary War correspondence of Myles Cooper. Finally, I am finishing off an article on John Adams’s journey to Philadelphia in the summer of 1774.

Do you have a favorite Adams?
Thomas Boylston Adams, John and Abigail’s youngest son. His letters are full of personality, wit, candor, and imagination.

What historians (or authors) do you admire?
I aspire to write like Joanne Freeman (Yale), John Cassidy (The New Yorker), and Jill Lepore (Harvard and The New Yorker). If I could be as productive as Alan Taylor (Virginia), who apparently writes for four hours each day, that would be nice, too.

Do you have a favorite book?
Two of my favorite books of the last few years are Jessica Choppin Roney’s Governed by a Spirit of Opposition (2014) and Andrew Beaumont’s Colonial America and the Earl of Halifax (2014). I am currently reading, and thoroughly enjoying, Jennifer Van Horn’s The Power of Objects in Eighteenth-Century British America (2017).

Why do you like being a member of the Athenæum?
Amid the hustle of central Boston, the Athenæum offers a peaceful respite for contemplation and a perfect venue for writing. I’ve found the fifth-floor Long Room is the perfect spot for me to settle down and write for two, three, or even four uninterrupted hours. I also have great admiration and respect for the Athenæum’s staff, many of whom have contributed to volume 13 of the Adams Family Correspondence. Several people went above and beyond in helping answer my sometimes-obscure questions, the result of which was a truly fabulous illustration of a Boston Library Society lending record for Daniel Greenleaf, a friend of the Adamses. I also have deep admiration for those in Advancement, whose work is invaluable to the Athenæum’s short- and long-term future.

“‘Of One Hart and One Mind’: Local Institutions and Allegiance during the American Revolution,” Early American Studies. Volume 15, Issue 1, Winter 2017.  Journal on the 2nd floor.