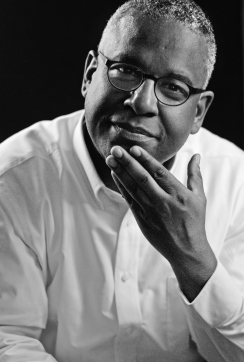 Clennon L. King is an award-winning Boston-based journalist, historian, and documentary filmmaker. Born to a prominent civil rights family in Albany, Georgia, King was inspired by his father, the late C.B. King, an attorney who represented civil rights demonstrators, including Dr. Martin Luther King, Jr. (no relation) during the 1961–1962 Albany Movement.

King left the public sector to delve into journalism in earnest, reporting as an on-air TV reporter for network affiliates in Dallas (KXAS), Atlanta (WSB), Miami (WSVN), Jacksonville (WTLV/WJXX), Mobile (WALA), and Boston (WGBH). He has also contributed to The Boston Globe.

His awards include an Emmy® nomination from the National Academy of Television Arts and Sciences’ Suncoast Chapter, a regional and national Edward R. Murrow, and a National Association of Black Journalists’ news award. King’s reporting on race has also been recognized by Columbia University’s Graduate School of Journalism.

King is the father of two adult sons, Crawford and Jordan, and resides in Roxbury, Massachusetts, home to his company, AugustineMonica Films. King founded his video production house in 2002, and in addition to producing fundraising and marketing videos for area nonprofits, the house also has to its credit three diversity program offerings. His first was the award-winning documentary “Passage at St. Augustine: A 1964 Black Lives Matter Movement That Transformed America,” which was presented at the Putney School, Vermont, in 2016. King’s second, the 65-minute documentary entitled “Fair Game: Surviving a 1960 Georgia Lynching,” premiered last August at Martha’s Vineyard Strand Theatre in Oak Bluffs. The third offering is a slideshow-lecture “MLK’s Boston Years,” providing a granular look at Dr. Martin Luther King, Jr.’s New England years.

Q: What is the meaning of your company’s name, AugustineMonica?

CLENNON L. KING: It bothers me how arbitrary society is about what stories it tells. So, when I discovered that the oldest city in the U.S. was named for a black preacher who was a fourth-century African bishop before becoming a saint, I decided to tell that story by using my company name. At the same time, I wanted to salute Augustine of Hippo’s mother, Monica, an African mother, for whom the California city, Santa Monica, is named. Worth noting as well is that my first documentary takes place in St. Augustine, Florida. I wanted to share this hidden history that speaks to the greatness of Black people.

Q: Did your mother have any influence on your career?

CLK: Indeed. What I thank my late mother Carol Johnson King for most is how she protected my freedom of expression growing up, sometimes much to the irritation of my father and siblings. I can hear her saying, “Let him express himself.” She was good about that. On the other hand, she was a Cleveland, Ohio native who earned her college degree in early childhood education and lived and raised her children in the deep South. For all the reasons above, Mom was a stickler about correcting my diction, grammar, and dialect, even in the presence of childhood friends. While embarrassing, her direction helped cut a clean path to what became a fulfilling career in communications, journalism, and visual storytelling.

Q: Why did you abandon your law studies?

CLK: The short answer is my heart wasn’t in it. Add to that that I was also a poor reader—and by extension, student—who found it far easier to learn by talking with people than by reading books. Don’t get me wrong. I had a dream of practicing law with my legendary Dad and was awestruck by his mastery of language, his love of the law, and commanding presence inside hostile Southern courtrooms. But that was his path, not mine. So, when I found out, during my first year of law school, that I had been passed over for an internship with ABC World News Tonight with Peter Jennings in the London Bureau because I was in law school and not pursuing journalism actively, I knew I had to make a choice. When I got back stateside, I did.

Q: How did you find out about the Athenæum?

CLK: In 2011, I think I was doing research on Elizabeth Peabody, a Massachusetts native who founded America’s first kindergarten. Since she also inspired the name of the settlement house I used to work for in Somerville as the director of marketing and development, I wanted to find out as much as I could about her, as it might be important to would-be donors. In my quest, I was directed to the Athenæum. Once I found out it wasn’t open to the public and that you had to be a member, I knew I wanted in. Given that my profession as a journalist and filmmaker often requires extensive research, I resolved I would buy a membership as soon as I could. And six years later, I did.

Q: What appeals to you about the Athenæum?

CLK: What appeals to me most are the out-of-print volumes, city directories, and the archival maps you can’t find anywhere else. It’s a researcher’s heaven.

Q: What were the great struggles of working on your documentary? The great joys?

CLK: The truth is my documentary, “Fair Game: Surviving a 1960 Georgia Lynching” was ‘in the can’ by the time I bought a membership to the Athenæum. But the challenge was to find a place to edit the film, uninterrupted. With just six months left to complete the documentary before it was to premiere on Martha’s Vineyard, I was under the gun. I found the solitude I was looking for on the Athenæum’s fifth floor. The natural light. The surroundings. The quiet. Being able to hear my thoughts. It was a short ride from my home in Roxbury. I could edit on my laptop from 9 a.m. to 8 p.m., take walks on Beacon Hill and just work, in the name of meeting my deadline. Doesn’t get much better than that.

CLK: There is an interesting story. I was recently doing research to make changes to an online video quiz I wrote and produced entitled “MLK’s Boston Years.” Specifically, I was trying to determine the exact Beacon Hill address of Dr. Martin Luther King, Jr.’s future wife, Coretta Scott, who, in the fall of 1951, had just arrived in Boston. Her landlord, as it turns out, was a Boston Cabot, who agreed to rent Scott a room and provide her breakfast, so long as she assumed housemaid duties—cleaning rooms, scrubbing floors, sweeping stairwells, and doing laundry. As a struggling music education major at the New England Conservatory of Music, she agreed to the terms and performed the requested duties for three months, before moving to Massachusetts Avenue in Boston’s South End. That’s where she met a young Boston University divinity student who happened to live three blocks away. And the rest, as they say, is history. As for the exact address where Scott lived, her fifth floor room was located at 1 Chestnut Street, a six-minute walk from the Athenæum. In fact, back in November, I took a break from working here, walked over, and knocked on the door, where the current residents were nice enough to give me an impromptu tour of Scott’s former digs. It doesn’t get much better than that.

Q: How often are you asked if you are related to Martin Luther King, Jr.?

CLK: Often. I don’t mind it, only because there was a relationship between our families because of our respective roles in the Civil Rights Movement.

There will also be a showing at Georgia Tech. Click here for more information.