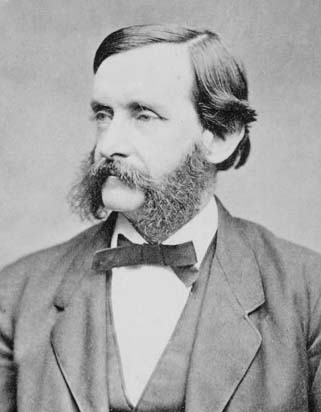 Thomas Wentworth Higginson (1823 – 1911) was a proprietor of the Boston Athenaeum, the author of numerous books on American literature and history, and a social reformer who championed the causes of women’s suffrage, the temperance movement, and the abolition of slavery.  As a Union colonel in the Civil War Higginson commanded the 1st South Carolina Volunteers, the first federally authorized regiment of African-American soldiers. Higginson is also remembered as one of the “Secret Six”, half of whom were proprietors or frequenters of Boston Athenaeum, who funded the radical abolitionist John Brown.  In later years Higginson would also gain renown as the literary mentor and publisher of Emily Dickinson.

Born in Cambridge to Stephen Higginson Jr. and Louisa Storrow, Higginson came from a well-to-do family, his father having been a successful merchant and his grandfather a member of the Continental Congress.  Higginson graduated from Harvard College in 1841 and from Harvard Divinity School in 1847, the same year he married Mary Elizabeth Channing.  A Unitarian, Higginson accepted a ministry in Newburyport where his outspoken support for women’s suffrage, labor rights, and the abolition of slavery soon proved too radical for the conservative community.  He was asked to resign after two years.  In 1852 Higginson became pastor of the Free Church in Worcester after an unsuccessful bid as the Free Soil party candidate in the Third Congressional District of Massachusetts.

In the 1850s Higginson worked tirelessly for the temperance movement, women’s suffrage, and the abolition of slavery, nominating Lucy Stone and Susan B. Anthony to serve on the committee on credentials at the 1853 World’s Temperance Convention in New York.  He joined the Boston Anti-Slavery Vigilance Committee and befriended fellow abolitionists Wendell Phillips and Theodore Parker.  In 1854 Higginson was arrested as he participated in the  attempt to free escaped slave Anthony Burns from the Boston Courthouse.  Following the John Brown’s failed uprising at Harpers Ferry in 1859, newspapers revealed that Higginson and fellow abolitionists Samuel Gridley Howe, Theodore Parker, Franklin Benjamin Sanborn, Gerrit Smith, and George Luther Stearns, had provided much of the financial backing for Brown’s actions.  The “Secret Six” had adopted a no-questions-asked attitude towards Brown, whom they admired as a righteous crusader against slavery.  The operational details of the conspiracy were likely known only to Brown and his immediate family.

With the advent of the Civil War, Higginson joined the Union Army and in November 1862 accepted a request from Brigadier General Rufus Saxton to become colonel of the First South Carolina Volunteers, a regiment consisting of slaves freed by the Union army.  Higginson thus had the distinction of commanding the first federally authorized African-American regiment.  Colonel Higginson’s military career ended in 1864 following a bout with malaria.  Colonel Higginson memorialized his war years in the book Army Life in a Black Regiment (1870).

After the war Higginson applied himself to literary endeavors.  His poetry appeared in The Present and The Harbinger and he contributed regularly to the Sunday edition of the Boston Globe, the Nation, and Woman’s Journal.  Higginson published several works of history and biography, one novel, and a text on flowers.  In 1879, two years after the death of his first wife, Higginson married Mary Potter Thacher, with whom he would have two daughters.  Now residing in Cambridge, Higginson served two terms as a Republican representative to the Massachusetts legislature before an unsuccessful bid for Congress as a Mugwump Democrat in 1888 (the Mugwumps were Republicans who changed parties to protest the Republican presidential candidate James G. Blaine).

While a prolific author in his own right, Higginson is best known in literary circles as the friend and editor of Emily Dickinson.  Higginson’s correspondence with Dickinson dates from 1862 when she sent him four of her poems in response to a piece Higginson had written in the Atlantic Monthly, in which he had offered encouragement to young writers.  Higginson praised Dickinson’s work but advised her against seeking publication too soon.  The two met for the first time in 1870 and maintained frequent correspondence until Dickinson’s death in 1886.  Dickinson’s first volumes of poetry were published in 1890 and 1891, co-edited by Higginson and Mabel Loomis Todd.  While Higginson and Todd were typical of nineteenth-century editors in freely moving stanzas and amending spelling as they saw fit, modern critics blame them nonetheless for altering Dickinson’s original intent.  As a result, subsequent editions of Dickinson’s work have privileged her manuscripts.

Colonel Higginson died on May 9th, 1911 at Cambridge.  He received a military funeral, his casket draped in the worn Union flag of the First South Carolina Volunteers.  Between 1886 and 1891 Colonel Higginson had been a proprietor of the Boston Athenaeum.  A 1902 feature of the Boston Sunday Herald featured a photograph of the second floor reading room (see below), noting the chairs where sixteen notable authors preferred to study and write, among them Colonel Higginson.