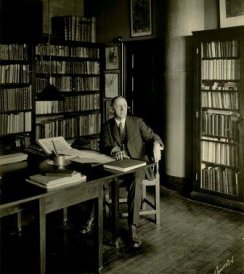 Daniel Berkeley Updike was born in Providence, Rhode Island, on February 24, 1860 to a well-to-do Episcopalian family that placed great importance in culture, education, and religion. He was the only child born to Caesar Augustus Updike and Elisabeth Bigelow Adams, which resulted in significant pressure being placed on him to continue the success and prestige of the family name. Despite his father’s occupation as a lawyer and politician, Daniel Berkeley was destined to follow his own calling, which led him to Boston to pursue his interest in typography, book design, and printing. “In the early stages of the Arts and Crafts movement Updike’s Boston relatives had taken an active part and it was through them that his typographical interest sprouted” (Winship, 11).

Updike worked his way up from an errand boy at Houghton and Mifflin Publishing Company, to printer and book designer at the Riverside Press in Cambridge, Massachusetts before founding Merrymount Press in 1896. The press initially focused on typographical design, but later expanded to encompass all aspects of printing. Updike staffed his new endeavor with many of his former co-workers whose abilities had met his satisfaction while working with them at the Riverside Press. None was more important to the press than John Bianchi, who was quickly put in charge of the other workers and became his business partner in 1915. Early on, Updike was heavily influenced by William Morris of the Kelmscott Press which prided itself on “doing common work uncommonly well.” This principle remained with Updike throughout the course of his life.

The Merrymount Press catered deliberately and by preference to a limited, superior public, which supported its efforts to supply a superior quality of ordinary output. This enabled it to establish a reputation for delivering only the very best obtainable typography, impression, illustrations, and binding regardless of the costs. Updike’s book designs combine the functional and the beautiful; they are noteworthy for their clarity of organization, easy readability, and excellent workmanship. One of his finest examples of early printing was the Altar Book, which was launched at Easter in 1896. The book’s exquisite typography and design placed Updike in high regard as a well-respected liturgical printer for those of the Episcopalian faith. Later in 1928, he was commissioned by J. P. Morgan to design the prototype for the revision of the Book of Common Prayer. “No piece of printing went through the Press that was watched over more attentively, with more unremitting thought for each line and page, in itself and in its setting” (Winship, 124).

Aside from founding the Merrymount Press, Updike was also a highly respected historian of typography and in 1922 authored Printing Types, Their History, Forms, and Use: A study in survivals, which became an authoritative source on typography. The book was published by Harvard University Press and coincided with a series of lectures he was asked to give for the School of Business Administration at Harvard University. After Updike’s death in 1941, John Bianchi purchased the press and along with his son, Daniel Berkeley Bianchi (named after Updike), continued the press for eight more years until it was officially closed in 1949. Merrymount Press was one of the finest American presses of the time and served as an exemplary model for others to follow. The press provided proof that beauty can be attained through dignity and simplicity.

Hutner, Martin. The Merrymount Press : an exhibition on the occasion of the 100th anniversary of the founding of the press. Cambridge, MA : Houghton Library Harvard University, 1993.

Updike, Daniel Berkeley. Notes on the Merrymount Press & its Work. With a Bibliographic List of Books printed at the Press, 1893-1933 by Julian Pearce Smith. San Francisco : A. Wofsy Fine Arts, 1975.