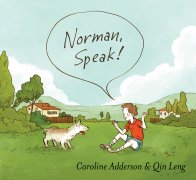 After a family adopts a dog from a local shelter, they cannot understand why he doesn’t respond to commands, until a chance encounter in the dog park reveals that their new dog only understands Chinese.

It’s Only Stanley by Jon Agee

Very strange noises that keep awakening the Wimbledon family one night have an even stranger source.

A Stone for Sascha by Aaron Becker

A young girl, still reeling from her dog’s death, finds solace while picking up stones on the beach during her family’s vacation.

A hound rescues a schoolgirl from the Seine, becomes a beloved school pet, is chased away by the trustees, and returns with a surprise.

Doggies: A Counting and Barking Book by Sandra Boynton

Dogs of all shapes and sizes bark from one to ten.

Carl leads his infant mistress on a wild adventure—the instant after her mother has left the house.

Boot and Shoe by Marla Frazee

Boot and Shoe are dogs that live in the same house, eat from the same bowl, and sleep in the same bed but spend their days on separate porches until a squirrel mixes things up.

After losing his job, Joe’s father has no choice but to sell Joe’s beloved collie, Lassie, to a wealthy duke, but when the duke takes her to the far north of Scotland, Lassie undertakes a 1000-mile journey to be reunited with her boy.

Sally Goes to the Farm by Stephen Huneck

Sally, a black Labrador retriever, goes to a farm where she enjoys various activities.

Except for his bath, Fergus experiences the perfect doggy day, from chasing cats and motorcycles to being scratched on his favorite tickle spot.

When a white dog with black spots runs away from home, he gets so dirty his family doesn’t recognize him as a black dog with white spots.

Hally, the Tosis family dog, has such bad breath that Mr. and Mrs. Tosis plan to give her away, until she proves to be an invaluable watchdog.

The Good Dog by Avi

McKinley, a malamute, is torn between the domestic world of his human family and the wild world of Lupin, a wolf that is trying to recruit dogs to replenish the dwindling wolf pack.

Biscuit in the Garden by Alyssa Satin Capucilli

Biscuit the puppy is eager to see the plants and make friends with the animals in the garden.

Because of Winn-Dixie by Kate DiCamillo

Ten-year-old India Opal Buloni describes her first summer in the town of Naomi, Florida, and all the good things that happen to her because of her big ugly dog Winn-Dixie.

The disappearance of a new puppy named Ginger and the appearance of a mysterious man in a mustard yellow hat bring excitement into the lives of the Pye children.

Little Willie hopes to pay the back taxes on his grandfather’s farm with the purse from a dog sled race he enters.

At first, Travis couldn’t stand the sight of Old Yeller. The stray dog was ugly, and a thieving rascal, too. But he sure was clever, and a smart dog could be a big help on the wild Texas frontier, especially with Papa away on a long cattle drive up to Abilene. Strong and courageous, Old Yeller proved that he could protect Travis’s family from any sort of danger. But can Travis do the same for Old Yeller?

“In the aftermath of the Big Growl that destroyed his city, a Lone Dog named Lucky must find a way to work with other dogs in order to survive in this frightening new world.”—Provided by publisher.

“Lucky and the rest of the Leashed Dogs have settled in the forest–but a vicious Pack has claimed the land, and will stop at nothing to ensure that it is theirs alone.”—Provided by publisher.

When he finds a lost beagle in the hills behind his West Virginia home, Marty tries to hide it from his family and the dog’s real owner, a mean-spirited man known to shoot deer out of season and to mistreat his dogs.

The Hundred and One Dalmatians: Or, the Great Dog Robbery by Dodie Smith

“Famously adapted by Walt Disney in 1961, Dodie Smith’s classic tale of a great dog robbery was inspired when a friend idly remarked that Smith’s own Dalmatian, also called Pongo, would make a lovely fur coat. While the film may have captured the spirit of the story, it lacks the style and moments of charm and humour that can only be found in Smith’s inventive novel: the vivacious antics of Nanny Cook and Nanny Butler, the reason why Cruella, as one feisty pup discovers, tastes of pepper, and the mystery behind the identity of the hundred and oneth Dalmatian.”—Provided by publisher.

This is the journey of Laika, the abandoned puppy destined to become Earth’s first space traveler. With the blending of fact and fiction, this story intertwines three compelling lives.

Apollo and Brownie are unaware that the apocalypse is at hand, but when their owners do not return and they run out of food and water, the dogs venture into the world, where they team up with a police dog, a flea that quotes Sun Tzu’s The art of war, and others in an attempt to survive.

Love That Dog by Sharon Creech

A young student, who comes to love poetry through a personal understanding of what different famous poems mean to him, surprises himself by writing his own inspired poem.

Dogs and Cats by Steve Jenkins

Are you a cat lover? A dog person? Either way, this book is for you! Read about how your favorite companion came to be a pet and how its body works. Then, flip the book over and find out about the other kind.

Hachiko: The True Story of a Loyal Dog by Pamela S. Turner, illus. by Yan Nascimbene

Relates the true story of a dog who accompanied his master to and from a Tokyo train station for a year and, after his master died, continued to wait for him there every day for many years.