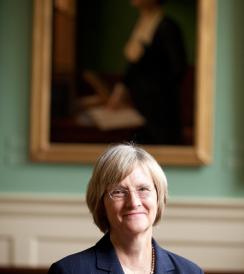 Historian Drew Gilpin Faust is the president of Harvard University and the author of six books.  Much of her scholarship has focused on the lives of women during the Civil War, with her more recent work addressing the topics of death and mourning in the war’s aftermath.  Her 1996 book Mothers of Invention: Women of the Slaveholding South in the American Civil War won the Francis Parkman and Avery Craven prizes.  Her most recent book This Republic of Suffering: Death and the American Civil War (2008) won the 2009 Bancroft Prize, was a finalist for the Pulitzer Prize and it was named one of the “Ten Best Books of 2008,” by The New York Times.  Speaking to the Royal Irish Academy at Trinity College, Dublin, last June, Faust remarked:

“One aspect of being a historian is pursuing new discoveries—the unknown material in a neglected archive, the data or detail previously overlooked, the historical event never before noticed or analyzed. But history is of course not just an accumulation of information; it is ineluctably interpretive. Data does not stand on its own; history does not actually “tell” us anything. The historian tells us about history. My most recent work on the American Civil War, for example, grew out of the long and widely accepted statistic of 620,000 war dead—approximately 2% of the U.S. population, the proportional equivalent of a stunning 6 million deaths in the United States today. But no one had really asked about the implications of that fact. How were they buried? Commemorated? Mourned? Remembered? But most of all I wanted to know what all of that meant to those who lived through it and thus what it might mean about how we live and die today.”

Catharine Drew Gilpin, was born September 18th, 1947 in New York City and raised in Clarke County, Virginia. Faust attended Concord Academy in Massachusetts before earning a B.A. degree in history from Bryn Mawr in 1968.  She went on to receive master’s and Ph.D. degrees from the University of Pennsylvania (Penn), joining the faculty as an assistant professor in 1976.  By 1984 she had become a full professor at Penn, later chairing the department of American civilization and directing the women’s studies program. Faust remained at Penn until 2000 when she was named the first Dean of the Radcliffe Institute for Advanced Study, the institute having been established following the 1999 merger of Radcliffe College with Harvard University.

In 2007 Drew Gilpin Faust became the first woman to serve as president of Harvard University.  As president, Faust has had to contend with challenges wrought by the global financial crisis, but has nonetheless expanded financial aid, extended the international reach of the university, and urged the adoption of environmentally sustainable practices.

Faust is married to medical historian Charles E. Rosenberg, also a member of the Harvard faculty, with whom she has one daughter and stepdaughter.

Faust will speak at the Boston Athenaeum on February 24th.  Her most recent book, This Republic of Suffering: Death and the American Civil War will provide the basis for her observations on historiography and the writing process.