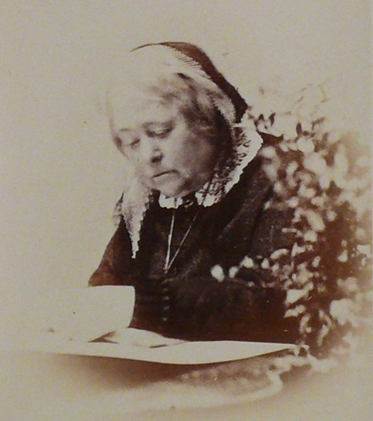 Elizabeth Palmer Peabody (1804-1894), “the grandmother of Boston”, was born to parents Elizabeth (“Eliza”) Palmer Peabody and Nathaniel Peabody, the eldest of seven children.  Elizabeth’s parents met in Atkinson, New Hampshire in 1798 when Eliza was sent to work at a boarding house after her father died.  Nathaniel Peabody was working there as a teacher while he was studying at Dartmouth.  They fell in love and married in November of 1802.

The young couple moved to Andover, Massachusetts and both taught at the North Andover Free School; two years later, they moved to Billerica and Elizabeth was born that May.  In 1806, the family moved to Cambridge so Nathaniel could attend medical lectures at Harvard, having decided to become a dentist.  The couple’s second child, Mary was also born in 1806.  Another two years later, the family picked up again and settled down in Salem, Massachusetts where Eliza began her own school and Nathaniel practiced dentistry.  The following year, in 1809, Sophia was born.  Over the next ten years, the Peabody’s had three sons (Nathaniel, George, and Wellington) and another daughter, Catharine, who died in infancy.

Elizabeth was educated at her mother’s school, and Eliza “appeared to be a rock of strength and stability, a model for her daughter of both strength of character and maternal, self-sacrificial spirit.”  Indeed, in 1821, the family moved to Lancaster and Elizabeth set up her own school, the Lancaster Boarding School; her sisters, Mary and Sophia, were some of her first students.  In 1822, Elizabeth moved to Boston, and befriended Ralph Waldo Emerson, from whom she took Greek lessons.

After a few years working in Boston, Elizabeth moved to Maine and spent the following two years as a tutor and governess.  In 1825, Elizabeth moved back to Boston and started a successful all-girls school in Brookline with her sister Mary.  Elizabeth later ran into some trouble when the parents of some of her students heard of her seemingly radical style of teaching in regards to religion, and in 1826, she eventually moved her school to Boston where she felt she would have more support.  The school was very well received at first, but “eventually failed largely due to a mishandling of finances by a third party” and a massive loss of students due to what Elizabeth referred to as “the New Bedford Affair” when she got wrapped up in what the rest of Massachusetts called “The Great Rotch Scandal” regarding the indiscretions made by Francis Rotch of New Bedford and his mistress.  In 1833, the school closed, and the Peabody sisters took their lives and careers in very different directions.

In 1834, Elizabeth went back to teaching and helped Bronson Alcott start the Temple School in Boston.  She recorded Alcott’s dialogues with his students and the first edition of Record of a School was published in 1835.  In the two following years, both volumes of Alcott’s Conversations with Children on the Gospels were published.  Although she respected Alcott’s goals for the Temple School, they did not see eye to eye.  Elizabeth “began to doubt his method…she worried that Alcott manipulated his students’ discussions, rather than allowing genuine expression.”  In fact, Elizabeth did not want Alcott to publish his second book in its original format.  She was worried about a “possibly hostile public opinion toward Temple School with Alcott’s probing and revealing of his young students’ feelings.  There were certain insights and intimations in a child’s inner life that were better left unexplored and unexpressed.”  Alcott ignored her fears, and Elizabeth left the school and moved back home to Salem.  Elizabeth ended up being right, and “the controversy that followed the publication of Conversations nevertheless tarnished [her] reputation as well as Alcott’s and effectively prevented her from gathering a full and profitable school of her own for some time.”

When Elizabeth left her position at Temple School, she decided to enter the book business, and in 1842, she opened her Boston book shop at 13 West Street.  The shop blossomed, as “Elizabeth believed that a book shop ought to not merely sell books but should function more widely as a meeting place for authors and readers to congregate, discuss, and purchase books.”  Elizabeth encouraged discussion and many famous minds congregated there, such as Margaret Fuller, Dr. William Ellery Channing, Ralph Waldo Emerson, and Reverend James Freeman Clarke.  Soon after opening her store, Elizabeth decided to add a circulating library (known as The Foreign Library) that consisted of “classic and living literature,” as well as foreign books and periodicals.  It was also during this time that Elizabeth helped to publish the famous Transcendentalist journal The Dial.  The book store was also the site of two very special family weddings: Sophia Peabody to American author Nathaniel Hawthorne and Mary Peabody to education reformer Horace Mann.

In 1849, Elizabeth gave a set of books on Polish and French history to the Boston Athenæum, “partly to keep them intact and partly in gratitude for reading privileges there.”  When her mother died in 1853, and Elizabeth and her father moved to New Jersey, and “the Foreign Library collection was packed up and shipped there.”  In 1855, when her father died, Elizabeth once again packed up her library and moved back to New England.

Back in New England, Elizabeth met the Schurz family who “had operated a German-speaking kindergarten in Wisconsin in 1856, following the methods of German Educational reformer Friedrich Froebel.”  Elizabeth studied Froebel’s methods and established the first English-speaking Kindergarten in 1860 in Boston on Pinckney Street.  Based on Froebel’s theories, Elizabeth believed that a “kindergarten pupil should be encouraged to grow organically, both physically, through play, and spiritually, through music and art.”  Elizabeth had at last found her true calling, and spent the rest of her life promoting the Kindergarten in the United States.

Elizabeth died in January of 1894 and was buried amongst some of New England’s other great minds at the Sleepy Hollow Cemetery in Concord, Massachusetts.

Lectures in the training schools for kindergartners (Cutter- DK .P31)

“The Peabody Sisters.”  Retrieved from http://www25.uua.org/uuhs/duub/articles/peabodysisters.html