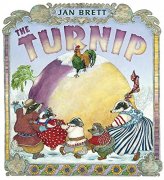 The Turnip by Jan Brett

Badger Girl is delighted to find the biggest turnip she has ever seen growing in her vegetable garden, but when the time comes to harvest the giant root, she is unable to pull it up without help from family and friends.

Today is Monday by Eric Carle

Each day of the week brings a new food, until on Sunday all the world’s children can come and eat it up.

How My Parents Learned to Eat by Ina R. Friedman; illustrated by Allen Say

An American sailor courts a Japanese girl and each tries, in secret, to learn the other’s way of eating.

A picture book biography of Julia Child, the famous chef –Provided by publisher.

Sitting in the kitchen of his grandfather’s Chinese restaurant, a young boy enjoys watching the chefs and waiters prepare and serve mouth-watering dishes.

The Ugly Vegetables by Grace Lin

A little girl thinks her mother’s garden is the ugliest in the neighborhood until she discovers that flowers might look and smell pretty but Chinese vegetable soup smells best of all.

If You Give a Moose a Muffin by Laura Numeroff; illustrated by Felicia Bond

Chaos can ensue if you give a moose a muffin and start him on a cycle of urgent requests.

The royal chef takes Max the dog, the royal taster, on several international journeys to find a dish for the land’s pickiest king.

While Julia is in the kitchen learning to cook up elaborate, delicious dishes, the only feast Minette is truly interested in is that of fresh mouse. Includes biographical information about Julia Child.

In this version of the traditional tale, the duck, the dog, and the cat refuse to help the Little Red Hen make a pizza but do get to participate when the time comes to eat it.

While staying with their aunt for a year, three nine-year-old cousins keep busy baking and selling cookies, putting on a poetry and singing performance, and trying to encourage a romance between their aunt and one of their former customers.

With the help of her wise old grandmother, twelve-year-old Rosie manages to work out some problems in her relationship with her best friend, Bailey, the boy next door.

A Tangle of Knots by Lisa Graff

“Destiny leads 11-year-old Cady to a peanut butter factory, a family of children searching for their own Talents, and a Talent Thief who will alter her life forever”–Provided by publisher. Includes cake recipes.

Madame Pamplemousse and Her Incredible Edibles by Rupert Kingfisher; illustrated by Sue Hellard

Forced to work in her unpleasant uncle’s horrible restaurant, a Parisian girl finds comfort and companionship in a shop nearby that sells otherworldly foods prepared by a mysterious cook and her cat.

Before becoming the first female private investigator in Botswana, eight-year-old Precious Ramotswe tracks down a thief who has been stealing her classmates’ snacks.

“Seventh grader Estefania ‘Stef’ Soto is itching to shake off the onion-and-cilantro embrace of Tia Perla, her family’s taco truck. She wants nothing more than for her dad to get a normal job and for Tia Perla to be put out to pasture. It’s no fun being known as the ‘Taco Queen’ at school. But just when it looks like Stef is going to get exactly what she wants, and her family’s livelihood is threatened, she will have to become the truck’s unlikely champion. In this fun and multicultural middle grade novel, Stef will discover what matters the most, and ultimately embrace an identity that even includes old Tia Perla.”–Publisher’s website.

The Lie Tree by Frances Hardinge

On an island off the south coast of Victorian England, Faith investigates the mysterious death of her father, who was involved in a scandal. She discovers a tree that bears fruit only when she whispers a lie to it — and the fruit, in turn, delivers a hidden truth. Does the tree hold the key to her father’s murder? Or will it lead the murderer to Faith herself?

A biography of a flamboyant, successful French chef and inventor of kitchen tools who opened soup kitchens during the Irish potato famine and taught the army how to feed itself during the Crimean War.

Recipes for beverages, sandwiches, desserts, soups, and meat and vegetable dishes, most of which use honey.

Seven-year-old Fanny describes her adventures with food and cooking at her mother’s restaurant in Berkeley, California. Includes forty-two recipes.

Chocolate: Riches from the Rainforest by Robert Burleigh

Traces the history of chocolate from a drink of the Olmec and Maya and later in Europe to its popularity around the world today.