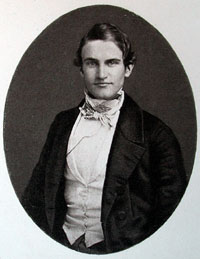 Francis Parkman (1823-1893) was a trustee of the Boston Athenæum from 1858 until his death in 1893. He is best known for his seven-volume history France and England in North America. In recognition of his talent and accomplishments, the Society for American Historians annually awards the Francis Parkman Prize for the best book on American history. Though Parkman made his mark as an historian of the colonial era, it is for his special contribution to the scholarship of the American Civil War that the Boston Athenæum is indebted to him. In the final months of the war, Parkman played a crucial role in procuring for the library books, newspapers, and pamphlets printed in the Confederate States of America during its four-year existence. Thanks to Parkman’s foresight, the Boston Athenæum is home to one of the most extensive collections of Confederate imprints in the world. As we commemorate the sesquicentennial of the American Civil War, it is fitting to remember Francis Parkman’s life and achievements.

The son of a Unitarian minister, Parkman was born in Boston in 1823. During his boyhood at the family farm in Medford, Parkman spent countless hours exploring the nearby expanse of forest now known as the Middlesex Fells Reservation. As a sophomore at Harvard College studying American history under Jared Sparks, Parkman conceived of one day authoring a comprehensive history of the Anglo-French struggle for control of North America. He graduated in 1845, and went on to complete a law degree at Harvard in 1846. Having little interest in the legal career his father had insisted upon, Parkman chose to embark on a westward journey with his cousin Quincy Adams Shaw. He took bareback riding lessons from a troupe of local circus artists in preparation for the adventure. The firsthand accounts Parkman gathered from settlers and his observations of life among the Sioux tribe formed the basis for his first published work, The Oregon Trail (1849).

An avid outdoorsman, Parkman nonetheless struggled with bouts of ill health and failing eyesight. By 1848 his eyes were so sensitive to light he confined himself to darkened rooms, relying on his sisters or friends to read his notes and take dictation. For the rest of his life Parkman suffered recurrent headaches, insomnia and near blindness, a confluence of maladies he dubbed “the enemy.” Often unable to see his own handwriting, he devised a wire lattice to guide his hand. He preferred writing in red pencil on orange paper, finding that combination the least stressful to his sensitive eyes.

Parkman married Catherine Scollay Bigelow in 1850, and in 1852 purchased a summer home in Jamaica Plain where he built an expansive garden. Parkman specialized in roses and lilies, cultivating hybrids of those flowers which still bear his name. The Parkmans had two daughters, Grace, and Katharine, and a son, Francis, who died of scarlet fever at age three. Catherine Bigelow Parkman died in 1858; Parkman never remarried.

In the ensuing decades, Parkman’s career as a horticulturist occasionally threatened to eclipse his more scholarly ambitions. He published The Book of Roses in 1866 and was appointed professor of horticulture at Harvard’s Bussey Institution, teaching from 1871 to 1872. He regularly exhibited his hybrids at the Massachusetts Horticultural Society, which lauded him with over three hundred prizes over his lifetime.

In 1865, Parkman built a house at 50 Chestnut Street in Boston which has become a National Historic Landmark. Still living most of the year at Jamaica Plain where he could garden, he spent winters on Beacon Hill, not far from the Boston Athenæum, of which he had been a trustee since 1858. With the Civil War concluding, Parkman, along with librarian William F. Poole and fellow trustees Donald McKay Frost and Raymond Sanger Wilkins, saw the importance of securing, for the benefit of future historians, newspapers, broadsides, books, and pamphlets printed in the Confederate States of American. As the Library Committee of the Boston Athenæum presciently reported in January 1866:

“The sudden collapse of the Rebellion in the early part of the year seemed to the Committee to furnish an opportunity, which should be instantly used, of obtaining the newspapers and other publications issue at the South during the War; and of which very few had ever gone beyond the Confederate States. These fugitive publications had a peculiar historical interest; and unless secured promptly, before they were destroyed, or had fallen in the hands of collectors, they would be forever beyond our reach. A Poor Richard’s Almanac of the year 1752 is priced on an English sale catalogue at five times its weight in gold; and one hundred years hence, a rebel almanac, or a dingy file of Southern newspaper, may, perhaps, reach a corresponding value.”

In the summer of 1865, Parkman traveled to Richmond, authorized to spend up to $500. He stayed only a few days, long enough to procure a complete file of the Richmond Daily Examiner, a newspaper which covered the events of the Civil War from the perspective of the Confederate capital. Poole remained in Richmond for several months. The diligence with which Poole procured imprints for the Athenæum is memorably described in Walter Muir Whitehill’s introduction to the 1955 checklist.

The ensuing decades saw Parkman bring to fruition the life’s work he had first envisioned as an undergraduate at Harvard. Pioneers of France in the New World, published in 1865, was the first of seven volumes to comprise France and England in North America, subsequent volumes being published every few years, concluding with the 1892 publication of A Half Century of Conflict. Still struggling with almost crippling disability, Parkman nonetheless traveled abroad during this period to consult primary sources in France and Canada. In recognition of his emergent reputation as America’s answer to Macaulay, Parkman was named president of the Massachusetts Historical Society, serving from 1875 to 1878. The preeminent American historian of his generation, Parkman died in 1893 at his home in Jamaica Plain. He is buried at Mount Auburn Cemetery.

While Parkman’s literary talents are still admired, the authority his scholarship once enjoyed has eroded. Modern critics have faulted Parkman for crossing the line demarcating known facts from historical fiction, with some detecting a persistent anti-Catholic and anti-French bias. Replete with passages lauding the triumph of civilization over savagery, Parkman’s work typifies the “imperialist” historiography late 20th-century scholars such as Francis Jennings labored to discredit. Modern readers who delve into Parkman’s personal politics will likely be disappointed by his fervent opposition to voting rights for women. With his work so steeped in the prejudices of his time and place, and written from a decidedly privileged outlook, academics now are more likely to read Parkman as a document of intellectual life in 19th-century Boston than for a reliable account of the events he chronicled.

Yet his books are continually reprinted, with paperback editions readily available at mainstream bookstores, suggesting an appeal that goes beyond academic interest. Parkman’s critics compare his work unfavorably to historical fiction, citing the almost cinematic detail of his descriptions, yet it is precisely because his work so closely resembles well written fiction that it remains enjoyable to modern readers. In Parkman’s prose the quotations from letters and other primary sources function almost as dialogue for his protagonists, while richly descriptive passages place the reader in the midst of dramatic events. These are the qualities readers continue to enjoy, even as scholars continue to chip away at the veracity of his accounts. Parkman’s ability to spin a good historical yarn is thus both liability and asset, depending on the reader.

Other aspects of Parkman’s life and work are similarly paradoxical. He eschewed secondary sources as unreliable, but nonetheless adorned his narratives with the trappings of historical fiction. He was an outdoorsman who championed the grandeur of the American forest, but spent much of his life in darkened rooms struggling with near blindness and chronic pain. And while his monumental histories of the colonial era are his most obvious legacy, his foresight in gathering contemporary documents at the close of the Civil War is arguably the greater achievement.