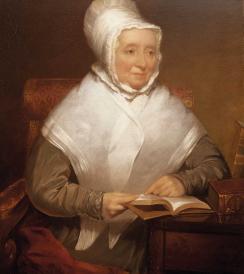 Since its founding in 1807 the Boston Athenæum has counted many professional authors among its members.  Historian Hannah Adams (1755-1831) was the first.  Once among the most famous women in America, her name is somewhat obscure today.  Adams is well remembered at the Boston Athenæum however, where some of her letters, early editions of her books and her portrait by Chester Harding are proudly kept.

Adams wrote books on United States history and what we today call comparative religion.  She was almost entirely self-taught, achieving financial independence and the respect of her male colleagues without the benefit of a formal education or family connections.  Hannah Adams was born in Medfield, Massachusetts to Thomas Adams, a hapless farmer and sometime bookseller, and Elizabeth Clark.  Afflicted by chronic ill health, Adams spent her childhood reading the contents of her father’s ample library.  Living on the brink of poverty, the Adamses took in boarders, from whom Hannah learned the rudiments of Greek and Latin.  Before long she was doing her part to support the family by tutoring the young men of Medfield who aspired to the college education she could not obtain.   Drawing on her expansive reading, Adams began work on an exhaustive survey of Christian denominations, with the aim of publishing a kind of dictionary that would eschew the judgmental tone which, in Adams’s view, marred similar works then in print.    An Alphabetical Compendium of the Various Sects Which Have Appeared from the Beginning of the Christian Era to the Present Day was published in 1784.  In it Adams presents the tenets of various sects in the words of their own adherents, neither exalting nor discrediting any particular denomination.

Her subsequent work, A Summary History of New England (1799), became the basis for a bitter dispute with Jedidiah Morse, author of the hugely successful Universal Geography, when in 1805 Adams wished to publish an abridgment of her history for school use.  Morse was preparing a similar work and Adams felt that he was impinging on a market to which she had staked claim.  Morse, a Calvinist pastor, countered that he had every right to publish whatever he pleased and accused Adams’s Unitarian backers of instigating the affair to bruise his reputation in the context of an ongoing interdenominational spat.  While arbiters eventually determined that Morse owed her nothing, the moral victory belonged to Adams, for the public largely resented the pastor’s perceived indifference to the welfare of an aged woman of modest means.

Indeed Adams’s income from book sales wavered from dismal to middling.  The quality of her scholarship, however, had earned her the respect and friendship of several prominent Boston intellectuals, most notably William Shaw and Joseph Stevens Buckminster.  These men would soon establish the Anthology Society, precursor to the Boston Athenæum, and become Adams’s lifelong allies and patrons, establishing in 1809 a modest annuity that would keep her out of poverty.   In 1810 Adams moved from Medfield to Boston where Buckminster granted her access to his private library and where she conducted research for her later works, A History of the Jews (1812) and Letters on the Gospels (1824).  In 1829 the trustees of the Boston Athenæum granted Adams borrowing privileges and access to the reading room, in essence a free membership.  Of this gesture Adams would write:

I now possessed, I should have thought it the height of earthly happiness. But I was now too far advanced in life to profit by the advantages I had gained. However, I was grateful, and happy. My friend William Shaw, Esq. gave me the liberty of frequenting the Athenæum. Amidst that large and valuable collection of books, I found an inexhaustible source of information and entertainment; and among other advantages, I found a few literary friends, in whose conversation I enjoyed ‘ the feast of reason and the flow of soul.

The Athenæum had only begun circulating its books in 1827, and Adams, contrary to some claims, was not the first woman allowed to use the library.  It should be stressed that while Athenæum policy never explicitly barred women, prevailing attitudes nonetheless rendered Adams and her female peers exceptional.  Because the complex history of women at the Athenæum resists casual summary here, the interested reader is urged to consult Barbara Adams Hebard’s excellent essay for the authoritative treatment of the subject (see references below).

It is customary in reference works to identify Adams as the first American woman to earn a living as a writer, or at least one of the first.  She is sometimes even cited as the first American of either gender to write professionally.  The distinction depends, as famous firsts often do, on semantics, the concepts of financial independence, income, and profession being subject to some debate.  Given her remarkable accomplishments, this kind of hair-splitting is unfortunate inasmuch as it distracts from a closer study of her life and work.

Accounts of Hannah Adams usually emphasize her timidity, frailty, and modesty.  These traits are indeed confirmed (and often exaggerated) by the historical record, thus it is fascinating to contrast them with the audacity of her steadfast ambition.  Adams died in 1831, not long after completing her memoir, which Adams intended to be published posthumously as a source of income for her surviving sister.  She never married and had no children.  At the time of her death she had achieved an uncommon degree of renown, even celebrity.  She was duly afforded the honor of being the first person interred in Mount Auburn Cemetery. 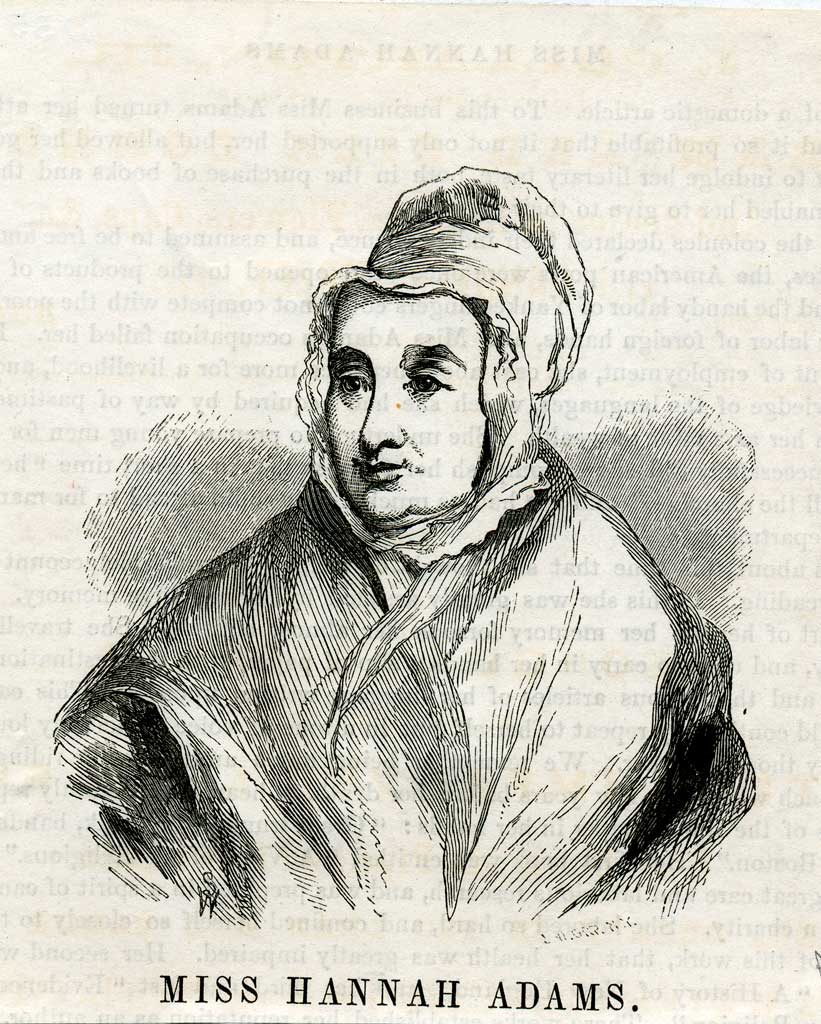 An Alphabetical Compendium of the Various Sects, which have Appeared in the World from the Beginning of the Christian Aera to the Present Day. With an Appendix, Containing a Brief Account of the Different Schemes of Religion Now Embraced Among Mankind. The whole Collected from the Best Authors, Ancient and Modern
Boston: B. Edes and Sons, 1784
TMBR (Appointment required)
2A .5Adl .3
Full text available on the Internet Archive

An Abridgment of the History of New-England: For the Use of Young Persons: Now Introduced into the Principal Schools in this Town
Boston:  Etheridge and Bliss, 1807
TMBR (Appointment required)
96 .Ad11
Full text available on the Internet Archive

A Dictionary of all Religions and Religious Denominations, Jewish, Heathen, Mahometan and Christian, Ancient and Modern: with an Appendix, Containing a Sketch of the Present State of the World, as to Population, Religion, Toleration, Missions, etc., and the Articles in which all Christian Denomination Agree
New York:  James Eastburn and Company, 1817
Rare Book (LC) (Appointment required)
BL31 .A3 1817
Full text available on Google Books