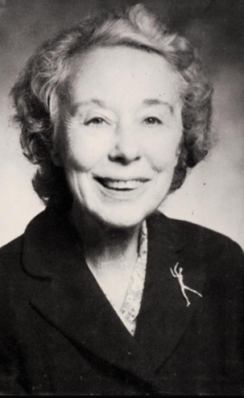 By Rebecca Johnston and Carly Stevens

Are you impressed by Clarice Starling in The Silence of the Lambs? Or maybe you prefer Dr. Spencer Reid on the hit television show Criminal Minds? If either of these characters entices you, check out some Helen McCloy novels featuring one of the world’s first psychiatrist detectives: Dr. Basil Willing. McCloy’s series featuring Dr. Willing mixed psychology and the classic detective story to get inside the mind of a killer. McCloy published over 30 mystery novels from 1938 to 1980, 14 of which featured detective and doctor Basil Willing. When McCloy died in Boston in 1994, she was remembered as a prolific mystery novelist and as the first woman president of Mystery Writers of America in 1950.

Helen McCloy was born on June 6, 1904 in New York, NY. Her father was William Conrad McCloy, managing editor of The New York Sun and her mother, Helen Worrell McCloy, was also a writer, contributing to magazines such as Good Housekeeping. McCloy was raised a Quaker and attended the Brooklyn Friends School in Downtown Brooklyn. McCloy loved to read and was particularly fond of Sherlock Holmes stories. She started writing as early as 14 and continued throughout high school. At the age of 19, McCloy moved to Paris to attend the Sorbonne. After graduating, she stayed in Paris and began working for Universal News Services, owned and operated by William Randolph Hearst. She continued her career in Paris working as an art critic until around 1927, when she returned to the United States and began writing fiction.

McCloy’s career and personal life revolved around writing mystery novels. In 1946, she married a fellow mystery writer Davis Dresser, who wrote under many pseudonyms but used Brett Halliday most often. They had one daughter together named Chloe McCloy. While married, McCloy and Dresser began the Torquil Publishing Company. The two separated in 1961, but remained on good terms. In a published collection of McCloy’s short stories, Dresser spoke highly of his then former wife, “I feel that Miss McCloy offers readers something more than the usual detective story… There is something more for the imaginative reader… In each there is an element of the uncanny. In each the reader is challenged to go below the surface of what seemingly-is to the submerged currents of what-may-very-possibly-be.” McCloy’s writing and storytelling capabilities were highly regarded by everyone in her life.

One of McCloy’s best known characters was Dr. Basil Willing, first introduced in 1938 in Dance of Death. According to McCloy, Willing was “the first American psychiatrist detective” and “the first psychiatrist detective to use psychiatry in detecting clues as well as in analyzing the criminal mind.” In this first novel, he acts as the forensic psychiatric assistant to the district attorney, searching for the killer of a young woman whose burning hot body was discovered in a snowbank. He claimed that “every criminal leaves psychic fingerprints” and focused on methods using logic and psychological analysis to catch the guilty party. Over time, the reader learns more about Willing’s background, including that he came from Baltimore, his Russian mother made him a fluent linguist, and he studied psychiatry in Paris and Vienna after beginning his education at Johns Hopkins. McCloy wrote more about Willing and his background in 12 of her novels.

Over time, McCloy noticed that her writing style was changing. As the years passed, her books strayed from classic detective story patterns in response to a post-World War II trend “demanding more suspense and less detection.” The year 1950 saw the publication of McCloy’s masterpiece, Through a Glass, Darkly. This novel is a more suspenseful adventure for Dr. Willing and brings in the paranormal, as he faces off against a doppelgänger. McCloy brought several paranormal entities in her later books, from flying saucers to poltergeists. McCloy used an unsettling, potentially un-scientific antagonist in these novels to emphasize the horror of the situation. While many praised her “psychological thriller” books, she preferred the classic detective story.

Beyond her writing, McCloy was an active and well-respected member of the mystery and crime writer community in America. She was involved in the Mystery Writers of America, which was established in 1945 with the “purpose of promoting and protecting the interest and welfare of mystery writers and to increase the esteem and literary recognition given to the genre.” The MWA is also responsible for presenting the Edgar Awards, which honors the best in mystery fiction, non-fiction, television, film, and theater. McCloy became the first woman to head the organization as president in 1950, and she went on to win an Edgar Award for Mystery Criticism in 1954 for articles she published in the Westport Town Crier. McCloy’s career as a prolific mystery writer continued alongside her involvement in the MWA. In 1971, McCloy started the first local chapter of the MWA in New England which inspired the formation of ten other chapters to form across America from Florida to the Rocky Mountains. In 1990, McCloy was named a Grand Master by the MWA, the highest honor a mystery writer can receive. Famed mystery writers like Agatha Christie, Alfred Hitchcock, John le Carré, and Stephen King also had this honor bestowed upon them. Today, the Mystery Writers of America continues to honor McCloy’s memory through The Helen McCloy Scholarship. The scholarship is given to two individuals annually with the goal of nurturing talent in mystery writing—in fiction, nonfiction, playwriting, and screenwriting.

But perhaps McCloy’s greatest contribution was her unwavering faith in the power of storytelling. She believed that the “true detective story is fun to write and fun to read,” and argued against the impulse to look down on stories that were simply about enjoyment. The detective story was one of the few surviving forms of storytelling, according to McCloy, and “love of the story is older than any folk-lore we know, as old as human language itself.” Despite positive reviews and acclaim, McCloy was modest about her work and her impact on the genre. When looking back on her career, she decided, “I cannot say what I have done. I can only say what I have tried to do.” Whatever her intentions, her devotion to storytelling was—and is still—celebrated.