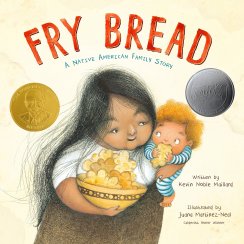 November is Indigonous Peoples month. Here are some books in our collection that cellebrate both modern and traditoinal Native culture.

We are Water Protectors written by Carole Lindstrom and illustrated by Michaela Goade.
(New Books Basket Children Picture Book + LINDS)
Urging readers to do what they can, this book explores the many Native protests against oil pipelines in a poetic and accessible way. Showing that water is not only essential for life, it is also sacred to many Indigonous people.

Trickster : Native American Tales : a graphic collection edited by Matt Dembicki
(PZ7.D396 Tr 2010)
Twenty-one Native Authors have worked to create this collection of trickster tales from a large variety of Native American Nations. Each tale features the work of a different illustrator creating a dynamic and engaging reading experience.

In the Footsteps of Crazy Horse by Joseph Marshall III ; illustrations by Jim Yellowhawk.
(PZ7.M356723 In 2015)
Fiction and nonfiction are eloquently intertwined in this story of a Lokota boy learning about his heritage, identity, and family through the stories of Crazy Horse his grandfather shares with him. A thoughtful tale of tradition, family history, and identity.

Indian No More by Charlene Willing McManis with Traci Sorell.
(Children’s New PZ7.M2312 In 2019)
Semi-autobiographical historical novel follows Regina Petit, a ten year old Umpqua girl. She has lived all her life surrounded by her tribe on the Grand Ronde reservation, but in 1957 the federal government signed a bill that states Regina’s tribe no longer exists. Regina is “Indian no more” in the eyes of the government. Her family then moves to Los Angeles in search of better jobs for her father. There, she makes friends with children of other races who have never met a Native American. It is also in this new neighborhood that Regina faces the vicious racism of the era for the first time.

Hearts Unbroken by Cynthia Leitich Smith
PZ7 .S64465 He 2018
Native Louise loves working on the school paper. During her senior year the paper has a big story to cover: the school’s music director has taken an inclusive approach to casting the production of Wizard of Oz, and the primarily white Kansas town is outraged. The group Parents Against Revisionist Theater has formed and anonymous threats are made. As they continue to uncover the story, Louise begins to fall for the white photographer she is working with. But she has learned that “dating while native” is difficult. Will protecting her heart break his?

The Marrow Thieves by Cherie Dimaline
(Young Adult PZ7 .D59 Ma 2017)
In this chilling near future dystopia, the world has nearly been destroyed by global warming. In the wake of that disaster an even darker situation is revealed. No one but the Indigenous people of North America are able to dream. The Indigenous people are in turn being hunted and harvested for their bone marrow, which carries the key to dreaming. Frenchie and his friend must stay hidden to survive, but one of them unknowingly holds the secret to defeating the Marrow Thieves.

Borders by Thomas King ; illustrations by Natasha Donovan.
(New Young Adult PZ7.K587 Bo 2021)
This graphic novel of King’s short story vividly tells the story of a Blackfoot teen and his mother as they try to cross the American/Canadian border. When asked her nationality, his mother says Blackfoot, refusing to compromise her identity to please the border officers. The two are then stuck between the USA and Canada and must stay in their car until the matter is resolved. Highlighting the many microaggressions that still exist against Indigonous people, this boldly illustrated graphic novel brings the already moving short story of identity to life.

A Queer History of the United States for Young People by Michael Bronski ; adapted by Richie Chevat
(Young Adult HQ76.3.U5 B69 2019)
While this book goes though many different cultures and eras with in American queer history, the first chapter focuses on different Native American Nations views on gender and sexuality. Many nationtions do not view gender as a binary as European societies long have.

The Sea-Ringed World : Sacred Stories of the Americas edited by María García Esperón ; illustrated by Amanda Mijangos ; translated by David Bowles.
(New Young Adult + PZ7.G161 Se 2021)
This anthology brings together stories from Indigonous peoples across the Americas, highlighting the diversity and similarities within their cultures.