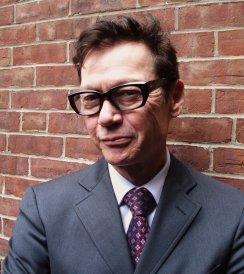 Jack Gantos is a regular patron and supporter of the Boston Athenæum. He considered joining when a young man, but his wages as a short order cook and valet parker (among other jobs) did not allow for extras, even though he thought our membership fees “fairly priced.” He found many congenial reading spaces in Boston and worked for many years in Bates Hall at the Boston Public Library but eventually had to look for a new haven in the face of rampant cell phone use. “I could tolerate the homeless and the mad, but the rude were just too much…So I went back up to the Athenæum and joined and have been delighted to find such a nourishing community.”

“When I stand on the outdoor balcony of the 5th floor and turn toward Park Street I can look into the window of Walter Lorraine’s office where he worked at Houghton Mifflin Publishers at #2 Park Street. In that office is where Walter agreed to publish my first book in 1975. I haven’t traveled very far but it is now 40 books later.”

The Boston Athenæum at 10 ½ Beacon Street is not far from Houghton Mifflin’s former home at 2 Park Street; however, the distance from his first book to his most recent can seem to stretch as far as the imagination, and Jack’s stretch seems infinite. The ability to write what people would want to read “from cradle to grave” is a rare one, but Jack Gantos possesses it. When you can barely turn the pages, you can laugh at the antics of Rotten Ralph, his feline creation. Once in school, you have the sympathetic company of Jack Henry and Joey Pigza. As you approach adulthood and grope to find your way, you can turn to Jack’s memoir of his own young adult self, Hole in My Life. Through it all, you will have the pleasure of enjoying his wit and extraordinary ability with words.

All of Jack’s quotations are from a brief memoir written as a response to our archivist’s call for members’ memories. He summed up his sense of belonging to this institution:

“Of course people go to a library to read books, but when you go there day after day you begin to read the other people as if they were books, too. And the reverse is just as true. But to be ‘read’ by such good readers results in the comfort of being well known.”

All members are welcome to submit memories on the Archive web page.