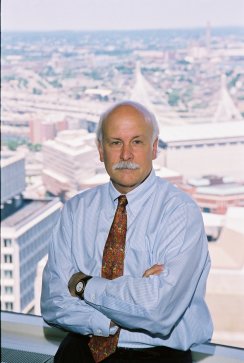 James Bernard Conroy was born in Bridgeport, Connecticut in 1949 to Bernard and Marguerite Johnson Conroy. Bernard was a 17-year-old medic in the WWII invasion of France and later became a hematologist. Marguerite took care of the home and encouraged Conroy’s reading, especially history. As a very young boy, Conroy remembers being disappointed to learn that he couldn’t become a Sioux Indian when he grew up. He read Anne Terry White’s All About Archaeology (1959) until the binding started to fall apart. Indeed, nothing trumped his boyhood love of archeology until he read Jim Bishop’s The Day Lincoln Was Shot (1955) as a teenager. He was utterly fascinated by Bishop’s methodology: searching for fact after fact, recording them on index cards, putting them in order by the minute and the hour, then writing a history of a single day’s events. Conroy has been drawn to historical research and writing ever since.

In 1967, Conroy enrolled at the University of Connecticut to study political science and history. He admits with good humor that his favorite college locations were not the classrooms. And yet he can still remember that fateful day on a patio, deep in thought, when he made the difficult decision between going to graduate school for history and moving to Washington D.C. to pursue a life in politics—an attractive prospect for many of his generation who were inspired by John F. Kennedy. He eventually served as Press Secretary for the United States Senate Committee on the Budget, Administrative Assistant to Congressman James Scheuer (D.N.Y.), and in the United States Navy Reserve as a photographer and journalist. After his daughter was born, however, he sought a profession that was not so dependent upon elections. Conroy earned his J.D. at Georgetown University and became a commercial litigation attorney, transitioning to semi-retirement only recently.

Throughout the years, writing history was always “in the middle,” as opposed to “in the back,” of Conroy’s mind. The trick was finding a topic. One day, while reading from Shelby Foote’s The Civil War: A Narrative (1986), he came across a reference to peace negotiations between Lincoln and three senior Confederate officials that took place on a riverboat in Virginia. He’d never heard of the Hampton Roads Peace Conference and found that very little had been written about it. “Never before had a sitting US president engaged in peace talks with the enemy in the midst of a shooting war, and never has it happened since.” Our One Common Country: Abraham Lincoln and the Hampton Roads Peace Conference of 1865 (2014) is Conroy’s attempt to address this gap in the Civil War narrative and help readers understand the underlying issues behind the tragic failure of the peace talks. 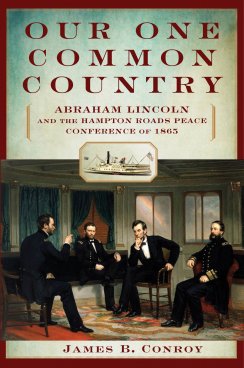 Conroy visited many libraries while researching Our One Common Country, including the Museum of the Confederacy in Richmond, the Library of Virginia, Duke University Library, the University of North Carolina Library, and the Library of Congress. However, he actually completed most of his research at the Boston Athenæum, where primary and secondary sources for both the Union and the Confederacy are extensive. Even while he was still working at his law firm at One Beacon Street, he could walk over on a lunch break to pick up books at Circulation or Interlibrary Loan and ask a question or two of the “uniformly pleasant and helpful” reference librarians and interns. The fifth floor reading room was also a relaxing place to complete most of his writing, and he found the nineteenth-century margin notes in some of the older donated volumes on the Civil War both amusing and illuminating. In February 2014 he enjoyed giving a lecture to an Athenæum audience where he felt there was a true intellectual and sentimental “resonance” with his subject (As our Civil War Discussion Group attended in full, this is no surprise).

In his spare time, Conroy enjoys family history research. His great-grandfather, born in Ireland and also named James Conroy, was in the fortieth New York Infantry in the Civil War. The Civil War veteran’s wife, born Bridget Burns, was a dressmaker for high society—Mrs. Lincoln included. At the moment, Conroy is hard at work, with the help of our reference librarians, choosing another mysterious, little-known, historical topic to research. That would be his favorite kind.Works Cited: Conroy, James. Our One Common Country: Abraham Lincoln and the Hampton Roads Peace Conference of 1865. Lyons Press: Guilford, CT, 2014.