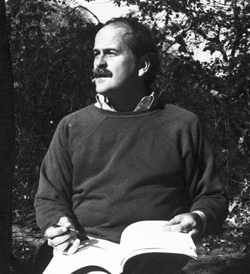 “I would much rather have a friend like you than all the gardens in the world.”-Martha, George and Martha Encore

Celebrated picture book illustrator and author James “Jim” Marshall was born in San Antonio, Texas in 1942. The son of an insurance salesman, George Marshall, and Cecille Harrison Marshall, he doodled a great deal in his early years, but discouraged from the pastime early in his schooling, he focused his energy instead on his prodigious musical talent, studying the viola and violin and eventually earning a coveted scholarship to attend the New England Conservatory in Boston. Unfortunately, he had only been attending the school for a year when a serious injury to his hand put an end to his musical career before it had even begun. Undaunted, Marshall decided to study French and History at Trinity College and then Southern Connecticut State College, where he earned a Master’s degree, before returning to Boston to teach at Cathedral High School in the South End.

During this stint as a teacher, Marshall began to draw seriously again. In 1971 a friend convinced him to take some of his sketches to Houghton Mifflin, and a few short weeks later an editor there asked him to illustrate Plink, Plink, Plink by Byrd Baylor (1971). Though the book was not a success, Houghton Mifflin was impressed with Marshall and a year later he published his own first book, George and Martha (1971), which heralded the arrival of what would become Marshall’s most endearing characters: a pair of best friends, who happen to be hippos, named (with Marshall’s usual tongue-in-cheek humor) for the embattled main characters in Edward Albee’s Who’s Afraid of Virginia Woolf.  The book immediately made a splash in the world of children’s books and was listed as a New York Times Best Illustrated Book of the Year and an American Library Association Notable Book for 1972.

Marshall’s deceptively simplistic style and knack for the ridiculous earned him a loyal following of young readers during a career that spanned more than twenty years and produced more than 75 works. He won few awards while he was alive, however, an oversight that his close friend, Maurice Sendak, explained as the result of his complete lack of commercialism: “No shticking, no nudging knowingly, no winking or pandering to the grown-ups at the expense of the kids. He paid the price of being maddeningly underestimated.”

Marshall was not only a talented artist but also an avid patron of the arts in every form. His close friend and publisher Regina Hayes wrote of him: “He loved to have beautiful things around him: a perfect Oriental rug, a handsome silver tea set, Japanese chests in mellow wood.” Understandably, Marshall had a deep appreciation for institutions like the Athenæum, which he joined in the final year of his life.

Sadly, the greatest recognition for Marshall’s work came only after his death on October 13, 1992, at the age of 50, after a very long illness. His loss was felt deeply by his long-time readers. Friends and colleagues wrote tribute after tribute describing his unforgettable spirit, his charm, his perfectionism: “Discussing his work doesn’t show what Jim Marshall meant to the people who knew him and cared about him. He combined the intelligence and wicked wit of a Dorothy Parker with the charm and generosity of a true Southern gentleman. He was endearing, loyal and much beloved. We will not see his like again.”

Marshall was posthumously awarded the Laura Ingalls Wilder Medal by the American Library Association in 2007 for his lasting contributions to literature for children.