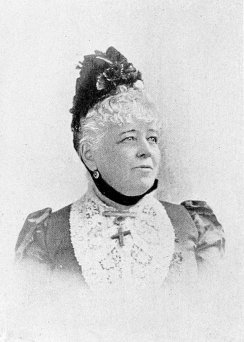 Was the author of Emma and Pride and Prejudice a member of the Boston Athenæum? Unfortunately, no—although we would have welcomed her happily into our plush red chairs. Austen, an English novelist, and Austin, an American novelist, are two very different women. Jane Austen, with an E, is widely remembered, whereas Jane Austin, with an I, is known by few. Here we share some information on the life and career of Jane G. Austin, with an I.

Jane G. Austin was a prolific nineteenth-century author. Over the course of her life Austin published 23 novels and numerous short stories. Austin, a Boston Athenæum member, was well known in New England’s literary community. She was described as sociable and generous, often opening her home to gatherings and giving advice to novice writers. She forged friendships with other prominent authors, such as Louisa May Alcott, Julia Ward Howe, Nathaniel Hawthorne, and Ralph Waldo Emerson. Jane Goodwin took the Austin name when she married her husband, Henry Austin, in 1850. Nothing is written on Austin’s thoughts about the striking similarities between her name and Jane Austen’s, but one can imagine it must have been rather annoying. The inclusion of her maiden initial in her publications shows an attempt to distinguish herself.

Mary Jane Goodwin was born to Isaac Goodwin and Elizabeth Hammatt on February 25, 1831, in Worcester, Massachusetts. The themes present in Austin’s writing came from her entire family’s interest in writing, genealogy, and history. Her brother, Hon. John A. Goodwin, authored The Pilgrim Republic. Her father, Issac Goodwin, was a well known lawyer, dedicated genealogist, and antiquarian. Her mother, Elizabeth Hammatt Goodwin, was a poet and song-writer. Unfortunately, Mr. Goodwin died when Austin was only two years old. After the death of her husband, Mrs. Goodwin moved the family to Boston and sent Austin to private schools to receive an education. From a young age, Austin was a dedicated and meticulous student. She showed an interest in history and writing. When Austin was a child, she was enraptured by stories of her ancestors told to her by her mother. Her long career began in her teenage years. Short stories started as a hobby for Austin, but eventually she began publishing her stories in magazines under pen names. Austin put her career on hold at the age of 17 when she married Henry Austin and raised her three children, Rose Standish Austin, Le Baron Loring Austin, and Lilian Ivers De Silva.

After a 13-year hiatus, Austin began writing and publishing again. Her serialized novels and short stories appeared in magazines such as Harper’s Monthly, The Atlantic, and Putnam’s Magazine. Cipher was first published in Galaxy and was met with glowing reviews. It’s rumored Austin’s dear friend, Louisa May Alcott, collaborated with her on this novel. Later publications of Cipher are dedicated to “My Dear L,” which is believed to be Alcott. Austin’s works have repeating themes stemming from her family’s history and her personal life. They revolve around New England history and often featured her ancestors. Austin’s mother first told her of Dr. Francis LeBaron, who eventually became the focus of one of her best known novels, Dr. Le Baron and His Daughters. Austin’s deep connections to New England were rooted in Boston and Plymouth. Austin lived most of her life in Boston in Beacon Hill, but spent time in Concord after she first married, where her friendship with Alcott began. Austin’s reputation solidified with historical romances based on her relatives in the Plymouth Colony. Austin also dabbled in novels for children including her first published novel, Fairy Dreams; or, Wanderings in Elf-Land. She published other historical novels, but she found her greatest success in the stories she wrote about pilgrims. Betty Alden, the First Born Daughter of the Pilgrims had a large sale and Austin’s obituary in The New York Times notes, “[Betty Alden’s] first edition sold before it was off the press.”

A historic shot of the second floor, where Austin once worked.

Austin wrote with great dedication. Her routine was strict. Constantly enriching her knowledge, she woke up early and devoted her mornings to writing or studying pilgrim history. A member and later a proprietor, Austin was a fixture at the Boston Athenæum. She even had a desk set aside for her in the building. Her regular spot in the Athenæum is noted in a 1902 article by the Sunday Herald. She spent her time on the second floor at the far end of the Long Room by a window. The window has since been replaced with a door to the drum and the space she once occupied is marked by a statue of Nathaniel Bowditch. Her time working was spent meticulously researching her family’s genealogy and adding to the notes left behind by her father. In the little time she was not writing, Austin spent her time with her family and friends. She spent her summers in Plymouth and returned to Boston in the winter. Austin’s social life was full. She and her husband often entertained writers at their home in Boston.

Austin is remembered as “instinctively gracious, ” and a “woman of great tact.” In her final years, Austin continued researching and writing with the same veracity as always. A biography published the year before she died reads, “those who know her give her a warm place in their affections. Her home is with a married daughter in Roxbury, although she passes a part of the Winter in Boston, and every summer she finds herself ready to return to Plymouth, where she constantly studies not only written records, but crumbling gravestones and oral traditions.” Austin died on March 30, 1894 at the age of 63.