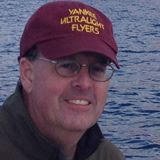 This month’s Athenæum Author is local writing teacher John Fiske. In June, he sat down with me for an informal conversation about himself, his new book (his first), and what he likes best about being a member of the Athenæum.

Mr. Fiske was born in Boston, has lived in the area his whole life, and now lives in Beverly. He has a BA in history from Trinity College in Hartford and a Master in education from Lesley University. Currently, he teaches English composition at the college level at Bunker Hill Community College in Charlestown. Many of his students are non-native English speakers.

He has been a member of the Athenæum for 14 years, but he has known about us since the late 1970s. At first, he told me, he thought one had to be part of “some sort of privileged, exalted class” to join. He was pleased to discover this was not the case.

Since becoming a member, he has felt a strong connection between the Athenæum’s collections and his work as an educator.

Q: What appeals to you about the Athenæum​ and being a member here?

We also spoke about his new novel, Titan’s Gold, and he described to me how he got the idea for the book, the process of writing it, and some of his real life inspirations.

First, a brief summary of Titan’s Gold: it is a science fiction story based on a classic what-if. It is a fact that the NASA/ESA probe Huygens landed on the surface of Titan, Saturn’s largest moon, in 2005. But what if Huygens had discovered evidence of alien life in the form of a derelict spacecraft? The plot is built around designing, planning, and executing a mission (privately funded) to find and salvage this derelict, and bring it back into Earth’s orbit where it can be examined by a team of scientists. In the course of investigating, the team finds evidence that this abandoned alien craft might hold the secrets behind the building of the Egyptian pyramids. But there are others who want the secrets, too, making for an exciting ending that leaves the reader wanting more. Mostly, it’s a fun story, as Mr. Fiske summed it up for me: “That’s what Titan’s Gold is, it’s just fun!”

Not all the action takes place in outer space. Titan’s Gold also has some local color. The characters spend time at MIT, and readers will readily recognize several Cambridge landmarks. And Mr. Fiske’s own experience as a private pilot informs some of the action, including his experience as an observer at the Mt. Washington Wave Camp, where they do glider flights down the mountain!

Q: Tell me a little bit about Titan’s Gold.

A: Titan’s Gold came to mind not long after the European Space Agency craft Huygens landed on Titan. The idea was, what would be the reaction, what would happen if NASA found a spacecraft on another planet? And I tinkered around with it. I tried writing some preliminary chapters, and I got nowhere, for a long time. I could not figure out what the story was. And then in October 2015, I saw the movie The Martian…when I was walking out of the theater, I could feel things starting to move. I decided that the story should be about a very fundamental act, and the fundamental act would either be a chase, a fight, a rescue, or something like that. The Martian was about a rescue, that’s a very basic, human thing to do. So I thought about having the story centered around a basic human act, so the story is about recovering something, bringing something back. And then—I don’t know why this happened—but I was driving with a neighbor…and this whole thing about the pyramids rushed into my head…some people really actually do believe [laughs] the pyramids were built by aliens! From there I said, alright, I know where this is going, I know what I’m going to do. And I started to get to work, and I realized I needed to see the pyramids, so I went there. I visited the pyramids twice—there was nobody there. I was standing there all by myself, and I thought, this is pretty cool! And once I got back I really just put my head down and wrote and wrote and wrote. A lot of junk. I went through probably five drafts, and then I knew I was ready for it to be read professionally. You’ve got to have another reader, you can’t rely on your own reading. So I found a reader through GrubStreet, met with [her], and she said I should be proud of what I’d done, she said she loved it. And I didn’t make any effort to find a publisher. So by the end of March or April of this year I published it myself, it’s available on Amazon, and I’ve done a few publicity events.

Q: What was your great joy in writing the novel? And your great struggle?

A: Joy and struggle. The joy is I just like to write. It’s fun, it’s easy for me. The struggle was typical writerly stuff. Just solving problems, whether it’s point-of-view problems, or timeline problems, and keeping that stuff straight. But the joy is, you know, telling my story, telling a story, getting my words—expressing myself, getting my idea out there. I think it’s a good idea, and I hope people latch onto it.

Q: Do you have any projects coming up—​like a sequel to Titan’s Gold—​that you’d like to talk about?

Q: [laughs] There were some things, yeah, that I was wondering about!

A: And I left Titan’s Gold the way it is so that there’s a lot of room for questions, people’s minds can invent stuff, and I want that. I don’t want to be closing off the imaginations of others. The sequel, which will be called Egyptian Gold, is going to end at the Great Pyramid of Khufu. I can’t wait to do it, it’s going to be so much fun to write.