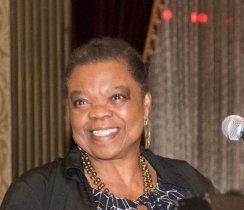 “Where I come from, names have meaning,” Lesego Malepe explained to me during our conversation in my office. Lesego means, “a blessing,” and I wager anyone who has met her would feel it is an apt name. She knew from early on it was a beautiful name, chosen by her parents because after three sons, a daughter had finally arrived. Her neighborhood friends also used Setswana names, although when she first went to school she was surprised to learn her playmates answered the teacher’s roll call of other names—English names—and they seemed surprised she did not have a special, official name for while at school. Later she accosted her mother, “Why don’t I have a school name in English like other children?” Avoiding her daughter’s irritated question, her mother advised she ask Ntate, her father, which she did when he returned from work. He was patient, explaining that since she was Setswana-speaking it made sense she have a Setswana name. She accepted his explanation but doubts lingered. “Everybody in class has a special school name, an English name.” Her father expanded, “You are special, not like other kids; you are blessed, as your name suggests.” But wanting to be like others, she continued to argue until her father found a compromise, “You find me a white kid named Lesego, or another Setswana name, and then maybe I’ll give you her white name as a middle name.” Lesego replied, “Ntate, you know white children don’t have Setswana names.” “That’s right,” her father said, “So why would you want to adopt a foreign name?” As Lesego walked away her father added, “Ngwanake, (my child), when you are older, you will thank me.” Lesego relaxed and relented. By the time she was in high school, she knew Ntate had been right, and she is forever grateful to her parents for giving her this name.

Lesego was born in Pretoria, South Africa, the fourth of five children. All her siblings were brothers. Her parents prayed for a girl after the first three (much older) brothers. She and her younger brother Kabelo (“a gift”) were very close; one uncle declared the pair “a gang.” She recalls bicycling recklessly with Kabelo until someone told their mother, who took the bikes away. When she was four years old, Lesego’s family and community were forcibly removed from Kilnerton in Pretoria and their houses and businesses confiscated without compensation to make way for whites. The community was moved to a new black township, Mamelodi, which is where she grew up.

The youth center at her church was a gathering place, but her childhood’s real home away from home was the library, where the librarian imparted to her not just a love of books but of libraries themselves. The township of Mamelodi (within Pretoria) offered the benefits of a qualified librarian who would have books ready for children when they walked in the door. He recommended Hemingway, and Steinbeck’s Of Mice and Men, books beloved to her to this day. A dedicated professional, he kept the library open later than its advertised hours so that teenagers would have a safe place to congregate. At the time, she did not appreciate how extraordinary his gift was. Mamelodi shielded her and her peers from the worst of white South Africa, something the parents appreciated while they went to work and shop in the wider—or whiter—world.

Lesego’s mother Hilda Mhlabasi taught fourth and fifth grades, and father Adam Tsele Malepe was an academic who taught Setswana at the University of South Africa, where Lesego could attend tuition free. Of course, like most teens becoming adults, being seen with her father was anathema, but his job allowed her to graduate free of student loans. She majored in political science, a subject she chose in an attempt to understand current events in her country. Her young, idealistic self could not comprehend the incarceration of young people like her brother, who at 18 years old was sentenced to life in Robben Island. The head of the political science department was a decent, kind, and professional man who set a tolerant tone in the all-white department where she thrived. Lesego applied for a Fulbright, and her professor supported her application with enthusiasm.

In 1978, she used her Fulbright Scholarship to attend Boston University with its African Studies Center (ASC), where she completed a Ph.D. in political science with her dissertation Convergence versus Divergence: Political Change in South Africa. Her other choice was Berkeley, but she chose Boston because its location on the east coast of North America made travel home easier than if she lived in California. Title VI funds the ASC as a National Resource Center at BU to promote language and area studies. “I had the time of my life at BU and can’t think of a thing I would change. It was smooth from beginning to end, but there’s no end, I will always be connected to BU.”

Lesego flourished in that community of scholarship and sociability. While at BU, she learned about the Boston Athenæum from others and found another congenial place to write, study, and think. BU holds an excellent collection of materials related to her scholarship, and she tends to go there for academic research. Over the years, she has written op-eds for various newspaper including the San Francisco Chronicle, the Baltimore Sun, and USA Today. She taught political science at Wheaton College in Norton, MA, before turning to creative writing full-time. She has always incorporated fiction into her teaching and found that literature allows students to connect emotion to facts in a way that a textbook cannot. The Athenæum has become “my creative place,” a space conducive to writing fiction, in particular short stories. “The whole building is charming, and the staff is helpful and professional. The atmosphere is just right.” Her favorite spots include the fifth-floor terrace (which opened last month after what seems a very late-coming spring), the second floor, and the third floor. Growing up in a large family means she was acclimated to background noise, and she therefore enjoys the ambient sounds surrounding her on the quiet (as opposed to silent) floors. She also loves writing on trains and regrets that flying to Washington, DC is now cheaper as well as faster.

Working in the Athenæum, she translated into English a prize-winning Setswana novel, Not My Brother’s Keeper by Sabata-Mpho Mokae. She has also completed a translation of a Setswana youth novella by the same author who teaches creative writing at the Sol Plaatje University in Kimberley, South Africa. She has started a collection of personal essays and a memoir about her father. Winnie Madikizela-Mandela died recently, and though Lesego has not done many op-ed pieces since her recent focus on writing and translating fiction, she wanted to take on this challenge. Journalism requires a rapid response, so when she came home late to find the message, she knew would have to compose a 700-word essay quickly, that night. When we chatted, she told me that Nelson Mandela’s well-known name was not his given one; he received an English name at school. His given name was Rolihlahla, which literally translates as “pulling the branch of a tree” but colloquially means “a troublemaker.” I see why Lesego says names have meaning where she comes from. She received a repeat invitation from the Turkey Land Cove Foundation to its artists’ retreat on Martha’s Vineyard this spring, which allows her to focus solely on her writing in yet another lovely setting.

And yet Lesego did much of this work on the fifth-floor terrace. She enjoys seeing her fellow members, and though she herself prefers moving around the building and settling in various spots, she finds comfort in observing her friends’ routines. “The right people, in their usual spaces.” If she plans to travel, she knows to alert the regulars so that they do not worry at her absence. She loves that different times and days also offer different vibes. Those who come on Saturdays differ from the weekday group—then she likes to work on the second floor, near the reference librarian Elizabeth O’Meara. On Wednesday evenings, she knows she’ll find certain people on the third floor. The Athenæum community provides a window into human dynamics that Lesego enjoys watching and joining. Home is still South Africa but also Boston.

Matters of Life and Death (2005)Reclaiming Home: Diary of a Journal through Post-Apartheid South Africa (2018)