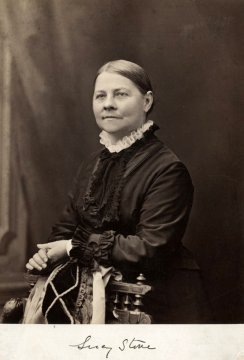 Too often the name Lucy Stone is overlooked in the history of the fight for women’s suffrage in the United States. But much is owed to this trailblazer, particularly in Massachusetts, for she achieved many firsts for women.

Born on August 13, 1818 to a farming family in West Brookfield, Stone was aware early on in life of the ways in which women were discriminated against. Although she was a brilliant and hardworking student, her desire to attend college was scoffed at by her traditional and domineering father. As she watched her older brothers earn a higher education (paid for by their father), 16-year-old Stone began teaching in the local schools, with the aim of saving enough to send herself to university. At the age of 25, she enrolled in Oberlin College—the first in the nation to accept both women and blacks. The latter was an attraction for Stone, who came from a family of ardent abolitionists. When she graduated four years later in 1847, she became the first woman from Massachusetts to earn a college degree.

After Oberlin, she followed in the footsteps of abolitionist William Lloyd Garrison, her hero, and began lecturing for the American Anti-Slavery Society. As one of the earliest female lecturers, Stone was controversial. Not only was this brazen woman speaking in public to mixed audiences, she was debating the hot button issues of slavery and women’s rights. The profession was a dangerous one and she was sometimes the target of verbal and physical assaults. Still, Stone (who was tiny in stature) easily commanded her audiences with her quiet but imposing manner—qualities that made her a highly respected teacher by her pupils. She was so successful, in fact, that she soon was earning as much as or more than her male counterparts.

In 1850, the first national women’s convention was held in Worcester, Massachusetts, due not in small part to Stone’s efforts and now well-known name. Although the 1848 Seneca Falls Convention is widely regarded as the beginning of the women’s movement, Stone considered the event in Worcester to be a greater milestone, as it was national rather than regional.

She was still causing controversy eight years later when she refused to pay property taxes, citing the same reason as America’s founding fathers: no taxation without representation. Unable to vote and unrepresented in Congress, Stone and many other women around the country protested, knowing their properties would be impounded.

In addition to her work as an abolitionist and suffragist, Stone is perhaps best known as the first woman to officially keep her maiden name after she married. Stone had never intended to take a husband’s name; indeed, she never expected to marry, preferring to dedicate her life to fighting for women’s rights. She particularly abhorred laws dictating that a woman’s property went to her husband. But in Henry Browne Blackwell she found an equal. At their wedding in 1855 the couple recited an oath of their own in addition to the traditional wedding vows: ”This act on our part implies no sanction of, nor promise of, voluntary obedience to such of the present laws of marriage as refuse to recognize the wife as an independent, rational being, while they confer upon the husband an injurious and unnatural superiority.” Blackwell supported the causes his wife fought for and helped her found Woman’s Journal, which printed speeches, debates, and columns on women’s suffrage. Run from its offices on Park Street in Boston, Woman’s Journal was the leading publication of the women’s movement. The nearby location allowed Stone and her daughter Alice to frequent the Boston Athenæum, where Alice in particular spent many hours.

Woman’s Journal was also the official publication of the American Woman Suffrage Association (AWSA). Stone left the National Woman Suffrage Association, founded by Susan B. Anthony and Elizabeth Cady Stanton, after disagreements arose over the Fifteenth Amendment. True to her abolitionist upbringing, Stone supported the amendment while Anthony and Stanton opposed it, resentful that it excluded women. Relationships between Stone and the other leaders of the movement remained strained afterward and the women continued to disagree about tactics for getting women the vote. In 1890, Stone’s daughter, Alice Stone Blackwell, united the two organizations as the National American Woman Suffrage Association. Under NAWSA, Woman’s Journal became The Woman Citizen, but reclaimed its former name in 1927. Publication ceased in 1931.

Lucy Stone did not live to see women earn the vote. She died at the age of 75 on October 19, 1893. Her ashes rest in Forest Hills Cemetery in Jamaica Plain and, although she does not sit with her suffragist sisters in the Portrait Monument at the Library of Congress in Washington, D.C., her likeness can be found in the Commonwealth Avenue Mall where she is accompanied by fellow women and activists Phillis Wheatley and Abigail Adams.