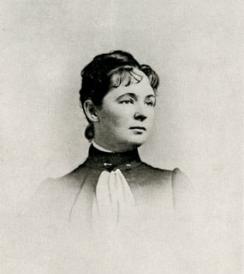 “Yet, though untended, still the Garden glows, / And ‘gainst its walls the city’s heart still beats, / And out from it each summer wind that blows, / Carries some sweetness to the tired streets”

Poet and novelist Margaretta Wade Campbell Deland (1857-1945) was born in Allegheny, Pennsylvania, a suburb of Pittsburgh, to parents Sample Campbell and Margaretta Wade, both of whom were clothing merchants.  Deland’s mother died in childbirth, and her father died shortly after, leaving her in the care of her aunt and uncle, Lois and Benjamin Bakewell Campbell, a deeply Calvinist family who lived in a neighboring estate.  Thus, from the age of two weeks, Deland lived with her relatives and regarded them as her parents.

As a child, Deland primarily kept the company of her neighboring cousins, but she also found other playmates.  “A pet chicken named ‘Anatomy of Melancholy,’ dogs, frogs, snakes were companions” as well.  Besides her many pets and cousins, Deland also made time for reading.  “The family library was large, and young Margaret Campbell read the best it had to offer.  Shakespeare, Hawthorne, Scott, and Defoe” among others.  Perhaps being surrounded by such a powerful group of authors was what stoked Deland’s passion for writing: she started writing her own short stories at the age of thirteen.

Deland transitioned from child to young adult at the age of sixteen with the surprise engagement to a thirty-eight year old neighbor.  Mrs. Campbell decided Deland should instead go off to school, and so she was sent to New York’s Pelham Priory, a wealthy boarding school.  Following Pelham Priory, Deland attended Cooper Union, also in New York.  A year later, she was offered a teaching position at the Girls’ Normal School in New York (now called Hunter College).

Immersed in her new life, Deland spent her vacations in Vermont with the other teachers instead of going home.  One summer, Deland met a new friend, a Bostonian teacher named Emily.  They kept in touch, writing letters back and forth.  The following summer, they met again in Vermont and Emily introduced Deland to her brother, Lorin Fuller Deland, with whom Margaret Campbell fell in love.  The couple got engaged shortly after.  In May of 1880, on the Campbell estate back in Pennsylvania, the two were married.  Shortly after, they settled back in Boston.

While living in Boston, Deland and her new husband attended Trinity Episcopal Church.  Deland became close friends with Lucy Derby, who was acquainted with many people in the Boston literary scene.  When Deland showed her new friend the verses that she composed in her spare time, Derby instilled such confidence in Deland that she brought them to the famous Boston-based printer and chromolithographer, Louis Prang, who began purchasing her writing to add to the cards he printed.

Derby wanted further success for her friend, and also sent one of Deland’s poems to the editor of Harper’s New Monthly Magazine.  Then, in March of 1885, Deland’s poem “The Succory” was published.  Three years later, Deland’s first novel, John Ward, Preacher, was published.  This book was so popular that Deland was able to purchase a summer home in Kennebunkport, Maine which she named “Greywood.”  And so began a highly successful literary career that lasted into World War II, with her last book, an autobiography called Golden Yesterdays, which was published in 1941, four years before her death.  Her most notable books were the “Old Chester Tales,” a series of novels set in the fictional town of Old Chester.  After this series came out, critics began to compare Deland to Jane Austen and George Eliot.

Besides writing, Deland spent much of her adult life working for different charities.  Shortly after their marriage, Deland realized that she and Lorin were unable to have children, so she devoted much of her time to helping unwed mothers and their children start new lives.  Deland also organized many different fundraisers for various organizations.  For example: “Deland’s love of flowers was widely known, and in the middle of the decade she began what became an annual jonquil sale to raise money for charity.”  One of her homes in particular, 35 Newbury Street, was well known for flowers that Deland planted.

Even after Deland’s writing career had truly taken off, she continued her charity work, branching out in a variety of different directions.  In 1893, Deland headed the Library Committee for Massachusetts.  In 1916, during World War I, she started the Authors’ Fund for the relief of Wounded Soldiers of the Allied Nations.  Late in 1917, Deland left for France and did relief work.  When she returned, she received a Doctor of Letters from Bates College, and was bestowed with this honor as well: “[w]hen Mrs. Deland was elected to the National Institute of Arts and Letters on Nov. 10, 1926, she became one of the first women to be chosen for membership in the institute.”

During the course of her life, Deland received many honors and was regarded highly in many circles and organizations throughout the United States and Europe.  A talented writer and poet, she also had a keen business sense and used her time charitably and thoughtfully.  Today, one can remember Deland by reading one of her popular novels or countless essays, or by visiting her home at 76 Mt. Vernon Street, as it is part of the Beacon Hill Walk led by the Boston Women’s Heritage Trail.

Within its rare books collections, the Boston Athenaeum holds a copy of Deland’s “The Old Garden” decorated by the renowned English artist Walter Crane (1845-1915), who was called “the father of the illustrated children’s book” by the famous printer, Edmund Evans.  This particular edition was published in 1894 in Boston by Houghton, Mifflin & Company.  The following images are scans from this book.