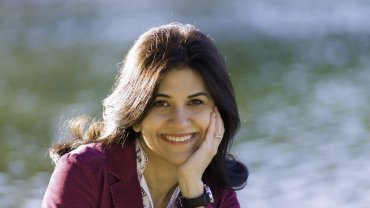 Marjan Kamali was born in Turkey to Iranian parents.  Her father was a diplomat who traveled extensively. The family accompanied him to Germany and then Kenya where the Kamali children consumed Enid Blyton novels by the dozens in grade school. They eventually arrived in post-Revolution Iran in 1980 when Kamali was only nine years old.  While English books had become less common in schools, shops and libraries in Iran after the revolution, the family still had classics in their home.  Kamali’s older sister was adamant that her sister’s English language skills not falter, so she precociously took upon herself the role of tutor—even going so far as to assign book reports. So as Saddam Hussein’s bombs rained down on Tehran during the Iran-Iraq war, the Kamali children would hide in the basement, emotionally and intellectually “escaping” as best they could into the worlds of Jane Austen, Charles Dickens and the Brontё sisters.

In 1982, Kamali’s family moved to Forest Hills, Queens, where she continued to enjoy reading, discovering American classics in middle and high school. In 1993, she graduated from U.C. Berkeley with a B.A. in English Literature and married soon after. She and her husband moved to Basel, Switzerland, where she obtained work as a scientific publications editor. Basel’s location was pleasantly convenient for extensive sight-seeing through Germany and France. In these years, Kamali began writing “little stories,” and dreamed of one day writing for a living.

When she and her husband moved back to New York in the late 1990s, Kamali enrolled at Columbia Business School.  The MBA program was an attempt to be practical, but the entire time, she felt like “a fish out of water.” It was actually at Columbia’s “math camp” that she got the idea for the short story that would become the first chapter of her debut novel, Together Tea (2013).  She was taking a class on spreadsheets and suddenly couldn’t stop imagining bizarre potential uses for them, such as rating one’s eligibility for marriage. It wasn’t long before she was drafting the tale of an Iranian mother who—to the great dismay of her daughter—uses spreadsheets to rate potential sons-in-law. While still working on her business degree, Kamali met with one of her old professors from Berkeley, the late Leonard Michaels. After teasing her for being a business school “sell out,” he read the short story she’d just written about the spreadsheet-loving matchmaker, and replied, “You know what this is, don’t you? It’s the first chapter to your first novel.”

Inspired by Michael’s words, Kamali enrolled in the M.F.A. for Creative Writing Program at N.Y.U.  Thus began her “crazy double life,” where she would commute from New Jersey to her uptown business school, surrounded by all of her “preppy republican friends” by day, then commute down to Greenwich Village and attend writing classes with all of her “artsy liberal friends” by night.  It was an overwhelming schedule to keep, and yet, she kept thinking of all of the girlfriends she had left behind in Iran, whose opportunities had been restricted.  She admitted to suffering from a sense of “immigrant guilt,” knowing that she was lucky to have escaped to a place where she had so many more options. Therefore, she persevered.  The birth of her first child required a short break from the universities, but by the end of 2002, just before her second child was born, she had completed both degrees and handed in a creative writing thesis entitled Together Tea.

In 2004, Kamali moved from New York to Australia. As seems to be the case with many mother-authors, creative writing continually took a backseat to work and caring for children. She recalls being so tired when her children were young that she could hardly string a sentence together, never mind write stories.  Finally one day, after moving back to Boston and dropping off her youngest child at his first day of kindergarten, she returned to her strangely quiet home and found herself pacing.  She had no idea what to do.  That night, her husband reminded her of the manuscript she had stashed away.  After a time, she went back to it and was shocked to realize, “Oh my goodness, this is about a daughter who is so hard on her poor mother!” Parenthood had given her a new sense of sympathy for the story’s meddlesome matriarch, so she began heavily editing the manuscript. She first changed the tense from present (popular in Y.A. fiction) to past.  Next, she decided to tell the stories from the perspectives of both the daughter and the mother, alternating between chapters. In the second half of the novel, mother and daughter (Darya and Mina), often at odds, seek to heal their relationship and address their own existential crises in a way that shocks family and friends—by taking a vacation to Iran.  Now a Massachusetts Center for the Book “Must-Read,” Together Tea travels between decades and continents, sharing the impressions and experiences of Iranian-Americans who find themselves perpetually “living on the hyphen.”

Kamali requires quiet in order to immerse herself in the world of her characters. As both a mother and an adjunct business writing professor at Boston University, quiet is hard to come by.  With the gift of a membership, her friend Jay Buchta introduced her to the silence of the Boston Athenæum, which has given her a tranquil place to think about the characters in the manuscript she affectionately refers to as “number two.” It’s a love story that takes place during the summer of the 1953 Iranian coup d’état and in present-day Massachusetts.

Kamali believes her work is timely, given the political relations between the United States and Iran, and she sincerely hopes that her American readers will gain a greater understanding of life for both Iranians and Iranian-Americans. Indeed, her work echoes with the firm belief that governments should never be confused with people.  And yet, regardless of the national or ethnic affiliations of her characters, she hopes to tell universal stories of family and friends, lovingly crafted meals, fine art and the creative impulse, and most importantly, the transformative power of empathy.