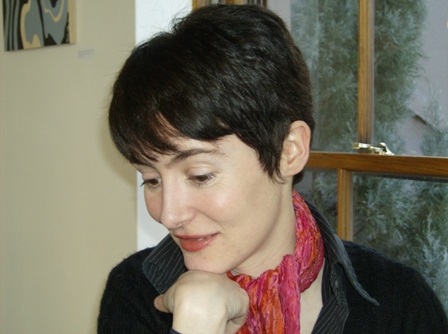 Mary O’Donoghue grew up in County Clare, Ireland.  She is an award-winning fiction and poetry writer, and is also a professor at Babson College, where she teaches fiction, rhetoric, and literature classes.

Just as Mary was finishing her graduate work in Irish Studies at the National University of Ireland, Galway, she discovered writing.  She had always been drawn to writing, but kept putting off any exploration of the art.  She enrolled in an extracurricular writing class, and, by chance, chose poetry over fiction. When writing, Mary’s first inclination is not the keyboard, but rather she works her manuscripts out by hand.  Her writing process is structured, and she likens it to carpentry—putting pieces together to build a whole.

Mary has also worked on translating the poetry of a former teacher, Louis de Paor.  Translating Ag Greadadh Bas sa Reilig / Clapping in the Cemetery in collaboration with de Paor was difficult yet rewarding; the conversion of one language to another was like working out a puzzle—searching for the perfect word in English to fit the precise meaning of the Irish.  At the same time, because Mary had a close connection with the poet, it was imperative to treat the language carefully in an attempt to capture the essence of the work.

The Athenæum has been lucky to have Mary as a member since the summer of 2006.  The Athenæum has served as a place to work, and Mary insisted that some of her best work has been done on the tables of the second and fifth floors.  Each floor offers a distinct work atmosphere.  While the hum of the second floor doesn’t distract her from her work, the fifth floor can be quieter in the evenings.

It was difficult for Mary to choose only a few of her influences, but she managed to put together a sizable list: David Ferry, Mavis Gallant, William Trevor, Anton Chekov, Tim Winton, Katherine Mansfield, Rachel Cusk, David Malouf, Robin Robertson, and Tomas Tranströmer.  The Athenæum has examples of many of these authors in its holdings.

Mary’s first two collections of poetry, Tulle (published by Salmon Poetry) and Among These Winters (published by Dedalus Press), were published in 2001 and 2007, respectively.  Mary recently completed her first novel, Before the House Burns, which has just been published in Ireland with Lilliput Press.  There are plans to launch the novel in America.  Completing the first draft was the fastest she had ever worked, she said.  Mary began on July 14, 2008, and ended on November 9th of that year.  What began as a short story developed into a novella. The novella turned eventually into a novel when Mary discovered a larger structure within the world she was creating. Since the launch of her novel, Mary has been returning to poetry for the past few weeks, exploring stricter forms.

Read the chapter “L. casei Immunitas” from the novel, Before The House Burns, as it was frist published in AGNI 70 (Fall 2009).