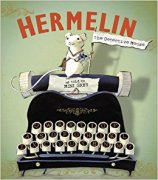 When 7 is accused of eating 9, worried 6 hires a detective to investigate.

A mouse with typewriting skills secretly helps the people of Offley Street find lost items, and eventually saves the day.

A small boy finds shelter from the rain in an old house and meets a ghost named Fred.

The Case of the Baffled Bear by Cynthia Rylant; illustrated by G. Brian Kraus

Clue of the Linoleum Lederhosen by M.T. Anderson

Looking forward to a vacation, Katie, Lily, and Jasper attach their flying Gyroscopic Sky Suite to the Moose Tongue Lodge and Resort, where they mingle with other child heroes found in books, and where they become embroiled in a mystery involving lederhosen-clothed quintuplets and a screaming ventriloquist.

When seemingly unrelated and strange events start to happen and a precious Vermeer painting disappears, eleven-year-olds Petra and Calder combine their talents to solve an international art scandal.

Mystery of the Burnt Cottage: The First Adventures of the Five Find-Outers and Dog by Enid Blyton

“Who could have set fire to Mr Hick’s Cottage? There are plenty of suspects: the cook, Mrs Minns, young Mr Peeks and even a tramp. But it’s the clues—a grey suspicious footprint and some grey cloth—that point the kids in the right direction. The Mystery series follows the adventures of ‘The Five Find Outers’—Pip, Bets, Larry, Daisy and Fatty, as they solve the most unusual crime cases with the help of their dog Buster.” — Provided by the publisher.

The Mystery of Meerkat Hill by Alexander McCall Smith

“Precious Ramotswe has two new friends at school and they have the funniest and most resourceful pet you can imagine. But they are upset that their family’s most valuable possession, their cow, has gone missing. Precious has a plan to find the missing animal but she needs the help of another in her search. Will she succeed and what obstacles will she face on her path?” — http://www.fantasticfiction.co.uk

After Marvin, a beetle, makes a miniature drawing as an eleventh birthday gift for James, a human with whom he shares a house, the two new friends work together to help recover a Durer drawing stolen from the Metropolitan Museum of Art.

Named after a character in a Shakespeare play, misfit sixth-grader Hero becomes interested in exploring this unusual connection because of a valuable diamond supposedly hidden in her new house, an intriguing neighbor, and the unexpected attention of the most popular boy in school.

The Unknowns: A Mystery by Benedict Carey

When people start vanishing from a godforsaken trailer park next to the Folsom Energy Plant, two eleven-year-olds investigate using mathematical clues that were hastily planted by their friend Mrs. Clarke before she disappeared.

The Curse of the Ancient Mask and Other Case Files by Simon Cheshire; illustrated by R.W. Alley.

Saxby Smart is no ordinary ten-year-old. He’s the best detective in the world, or at least the best one who also happens to be in elementary school.

Under the Egg by Laura Marx Fitzgerald

Her grandfather’s dying words lead thirteen-year-old Theodora Tenpenny to a valuable, hidden painting she fears may be stolen, but it is her search for answers in her Greenwich Village neighborhood that brings a real treasure.

Harriet the Spy by Louise Fitzhugh

Eleven-year-old Harriet keeps notes on her classmates and neighbors in a secret notebook, but when some of the students read the notebook, they seek revenge.

A sweet little cat drives a man to insanity and murder. The grim death known as the plague roams a masquerade ball dressed in red. A dwarf seeks his final revenge on his captors. A sister calls to her beloved twin from beyond the grave. The original tales have been ever so slightly dismembered—but, of course, Poe understood dismemberment very well. And he would shriek in ghoulish delight at Gris Grimly’s gruesomely delectable illustrations that adorn every page. So prepare yourself. And keep the lights on.

The Case of the Missing Marquess: An Enola Holmes Mystery by Nancy Springer

Enola Holmes, much younger sister of detective Sherlock Holmes, must travel to London in disguise to unravel the disappearance of her missing mother.

When Ted and Kat’s cousin Salim disappears from the London Eye ferris wheel, the two siblings must work together—Ted with his brain that is “wired differently” and impatient Kat–to try to solve the mystery of what happened to Salim.

The Midnight Dress by Karen Foxlee

Rose, nearly sixteen, is used to traveling around with her alcoholic father but connects with the people of a small, coastal Australian town, especially classmate Pearl and reclusive Edie, who teaches her to sew a magical dress for the Harvest Festival while a mystery unfolds around them.

“In ‘The Cask of Amontillado,’ a man exacts revenge on a disloyal friend at carnival, luring him into catacombs below the city. In ‘The Masque of the Red Death,’ a prince shielding himself from plague hosts a doomed party inside his abbey stronghold. A prisoner of the Spanish Inquisition, faced with a swinging blade and swarming rats, can’t see his tormentors in ‘The Pit and the Pendulum,’ and in ‘The Tell-Tale Heart,’ a milky eye and a deafening heartbeat reveal the effects of conscience and creeping madness. Alongside these tales are visual interpretations of three poems—’The Raven,’ ‘The Bells,’ and Poe’s poignant elegy to lost love, ‘Annabel Lee.’ The seven concise graphic narratives, keyed to thematic icons, amplify and honor the timeless legacy of a master of gothic horror. In a thrilling adaptation of Edgar Allan Poe’s best-known works, acclaimed artist-adapter Gareth Hinds translates Poe’s dark genius into graphic-novel format.” — From publisher’s website.

In 1943, a British fighter plane crashes in Nazi-occupied France and the survivor tells a tale of friendship, war, espionage, and great courage as she relates what she must to survive while keeping secret all that she can.

The Pearl Thief by Elizabeth Wein

When fifteen-year-old Julia Beaufort-Stuart wakes up in the hospital, she knows the lazy summer break she’d imagined won’t be exactly like she anticipated. And once she returns to her grandfather’s estate, a bit banged up but alive, she begins to realize that her injury might not have been an accident. One of her family’s employees is missing, and he disappeared on the very same day she landed in the hospital. Desperate to figure out what happened, she befriends Euan McEwen, the Scottish Traveller boy who found her when she was injured, and his standoffish sister, Ellen. As Julie grows closer to this family, she experiences some of the prejudices they’ve grown used to firsthand, a stark contrast to her own upbringing, and finds herself exploring thrilling new experiences that have nothing to do with a missing-person investigation. Her memory of that day returns to her in pieces, and when a body is discovered, her new friends are caught in the crosshairs of long-held biases about Travellers. Julie must get to the bottom of the mystery in order to keep them from being framed for the crime.