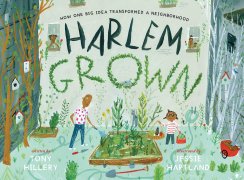 With wonderfully detailed illustrations, Harlem Grown tells the story of Tony Hillery and the students he worked with to create an operational farm in their NYC neighborhood. Through their hard work, the community gained beauty, conection, and healthy food.

You are never too old to learn something new, and Mary Walker is proof of that. Mary Walker was born into slavery in 1848. At age 116, she learned to read. This biographical picture book brings her amazing story of perseverance to life.

Peruvian-American Author Juana Martinez-Neal tells the story of Zonia, a young girl who lives in the Amazon rainforest. Through following Zonia as she meets with her animal friends, readers can begin to learn about how and why we should care for the rainforest.

In this tale of self-acceptance and the beauty of diversity, a young girl learns that while her eyes are different from those of her peers, they reflect her family’s history and strength.

Lupita Nyong’o crafts a beautiful story about the harm of colorism and how one little girl goes on a magical journey to learn to see her own beauty. With illustrations as beautiful as the night sky, this story is equal parts heart wrenching and heartwarming.

You Matter by Christian Robinson
(Children Picture Book + ROBIN)This bright and colorful picture book shows readers that everything and everyone in the world is connected and important.

This silly book follows Reuben the bear who tries to figure out who put a wet spot on his pants in a rather embarrassing area. As he investigates and starts to realize it was his own accident, he learns about how to handle embarrassment with empathy.

From founding member of Drag Queen Story Hour, Lil Miss Hot Mess, comes this fun and fierce take on “the wheels on the bus” that demonstrates the power and joy of being yourself.

Mary Golda Ross worked as an engineer in the classified department of Lockheed Air Corporation. This inspirational biography follows her journey as a female Cherokee engineer and mentor.

Food and family are always close together. This beautiful picture book explores the importance of Fry Bread to a modern Native American family and the culture they share.

I’m on it! by by Andrea Tsurumi and Mo Willems(Children Picture Book TSURU)

Have some fun with prepositions in this animal filled book.

Yasmin loves books and helping out at the library. When she brings her favorite book from home to show the librarian, she loses it! Will she be able to find it among all the library books?

I Will Race You through this Book! by Jonathan Fenske
(Children Picture Book FENSK)

Book-It Bunny breaks the fourth wall in this adventure story. Can you beat him to the end of the book?

The Lion of Mars by Jennifer L. Holm

Bell is just a regular kid, aside from living in a colony on Mars. When a virus reaches the colony and all the adults get sick, it is up to Bell and the other children to save their families, the colony, and perhaps the whole planet.

On Zoe’s twelfth birthday, she receives a letter from the father she has never met. In the letter, he claims he is innocent of the crime that placed him in jail for her whole life. Zoe then investigates, determined to find out the truth. Can she balance school, her baking internship, and her budding career in investigation?

Former notorious chicken snatcher, Esquire Fox has given up her life of crime to run the Animal Rescue Agency. In this first instalment of the upcoming series, Esquire and company head to the Arctic to rescue a polar bear cub from one of the biggest threats to nature: humans.

Though he travels for work, Mr. Bianchi never misses a bedtime story for his daughter. He calls her every night from payphones around the world to tell her a story. Each story must fit in the time a coin can buy. Mr. Bianchi’s travels frame this wonderful collection of short stories.

This powerful and ultimately uplifting exploration of internalized racism and colorism follows thirteen-year-old Genesis as she learns to love herself despite the verbal abuse she has faced from her peers and her own family.

There are times when friends begin to drift apart. For Maureen and Francine Carter, that time was at the start of sixth grade when one of the twins became interested in popularity. This boldly colored graphic novel explores what it means to be a friend and a sister when interests and personalities are always evolving.

Although Moon and Christine grew up in the same Asian-American neighborhood, they are nothing alike. Sometimes being different is what makes a friendship strong. As the girls grow closer together, Moon shares her deepest secret: she can communicate with the stars, which tell her she does not truly belong on earth. Moon has always been there for Christine, will Christine be able to support Moon when an emergency arises?

Beetle & the Hollowbones by Aliza Layne, coloring by Natalie Riess and Kristen Acampora
(PZ7.L442 Be 2020)

Twelve-year-old goblin-witch Beetle, would rather not study witchcraft. She would much prefer to spend her days with her best friend, Blob Ghost. When Beetle’s former best friend, Kat returns to town her days of hanging out with Blob Ghost are threatened. Kat has returned for an apprenticeship with her sorceress aunt. Beetle’s jealousy of Kat quickly changes to worry when she learns of the sorceress’s evil plan that could destroy Blob Ghost and his fellow spirits. Can Beetle harness the magic she so wished to ignore in order to save the day?

This autobiography tells the story of Jo Ann Allen, one of the “Clinton 12,” the first group of Black students to integrate into an all white public high school in the American South. The eastern Tennessee town’s bigotry was masked with false southern courtesies. That is, until the school integrated and a much darker side of the town’s white population came to the surface. The Clinton 12 faced extreme bigotry and violence as they tried to attend the school. This heartbreaking personal account brings a new light to this historic moment, highlighting that among this national attention and historic pressure, Jo Ann also wanted to live life as a normal teenager. She wanted to play music, hang out with friends, and learn as white students were able to do without combating bigotry.

Indian No More by Charlene Willing McManis with Traci Sorell
(PZ4.M2312 In 2019)

Semi-autobiographical historical novel follows Regina Petit, a ten year old Umpqua girl. She has lived all her life surrounded by her tribe on the Grand Ronde reservation, but in 1957 the federal government signed a bill that states Regina’s tribe no longer exists. Regina is “Indian no more” in the eyes of the government. Her family then moves to Los Angeles in search of better jobs for her father. There, she makes friends with children of other races who have never met a Native American. It is also in this new neighborhood that Regina faces the vicious racism of the era for the first time. Umpqua author Charlene Willing fills this novel with her own tribal history and experiences as she tells the story of Regina discovering her identity during the Civils Rights Era.

The phrase “Sea-Ringed World” comes from the Aztec term for the area of North and South America. In this collection of sacred stories, you will find tales of creation, nature, the universe, and more from Native communities all across the Americas.

Soledad “Sol” Gutierrez’s life was thrown into upheaval when her mother was deported last year. She lives in a new home and has started at a new community college. In an effort to fit in, she joins her school’s history club and participates in their odd initiation: she must steal a fork from the oldest house in town. When she sneaks in, she is caught by the homeowners’ grandson, Ethan. After this moment, Sol’s life is once again dramatically altered. She will soon learn that fitting in matters less than being your authentic self.