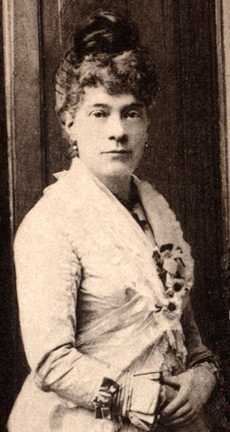 “Within ambition’s lofty gains / She strives to dull Love’s tender pains; / All other comfort she disdains.
The laurel crown is forming fast, / She feels its royal weight at last, / And thinks the triumph slays the past.
O woman heart, ye’ll find again / The burning fire, the tender pain, / For Love will never thus be slain.”

-excerpt from “Coincidence,” a poem from After the Ball, and other poems

Nora Perry (1831/41-1896), beloved author, journalist, and poet, was born in Dudley, MA to parents Harvey and Sarah (Benson) Perry.  When she was a child, the Perry family moved to a two-story home near Brown University in Providence where her father was employed as merchant.  She spent her adult life living in Boston and her later years in Lexington, MA.  During a visit to her home town, Dudley, Perry suffered from a stroke and died the following evening on May 13th.

Perry was educated at both home and in private schools, where she “received a varied and liberal training in many lines.”  Some felt that “her literary talent was predominant always,” and her first venture into writing was at the young age of eight, when she wrote “The Shipwreck.”  This unpublished short story was not a sweet, innocent tale; it was a bone-chilling romance that scared her young friends.  Perry grew up loving books like Arabian Nights and other “boys’ stories,” and, she was often quoted saying that “she was rather proud of the fact that she never went through the ‘Byron Age.’”  As she got older, Perry also enjoyed Emerson’s essays, as well as the poetry of Robert and Elizabeth Barrett Browning.

Perry’s first published serial, “Rosalind Newcomb,” debuted in Harper’s Magazine during 1859-1860, although her first published piece was printed in a religious magazine.  Soon after, she moved to Boston, MA and worked as the Boston correspondent for both the Chicago Tribune, and then the Providence Journal.

Perry’s first commercially successful poem, “Tying her bonnet under her chin,” although originally given to (and turned down by) the Atlantic Monthly, was published in the National Era, a weekly newspaper produced in Washington, DC.  The poem became so popular that is was sung all over New England, and parodied and copied in many different publications.  This popularity finally caught up with the Atlantic Monthly staff, who offered to publish another original poem if it was just like the one published in the National Era.  Ms. Perry accepted, and they went on to publish, “After the ball,” one of her best-loved pieces.  Longfellow praised the poem, noting that it was “a very cleverly versified poem that—a very artistic poem.”  Shortly after, Ms. Perry published After the Ball and, other poems.  The book received good acclaim; in the February 1875 issue of Harper’s New Monthly Magazine, it was said to have “poetic feeling, fancy, delicate sentiment, grace, and music.”  Although Perry “wrote only when she felt so inclined,” she published multiple children’s books, as well as a myriad of poems and stories in other well-known serials.  She was so well-known that in 1890, she was listed as one of the 125 suggested writers who would become part of The Critic’s Twenty “Immortelles.”

Perry was honest and genuine, vivacious and clever.  And as one editor wrote of her, she was charming, or, at least “when she chose to be charming.”  She preferred the company of men, as she “seemed keenly conscious of, and particularly antagonistic to, the characteristically feminine foibles.”  Yet, she still “possessed many warm and loyal friends among women,” such as fellow writers Rose Terry Cooke and Harriet Prescott Spofford, who remained a lifelong friend.  Spofford referred to Perry as a noble and lyrical poet, noting that “[h]er songs seem to sing themselves, and their music bubbles up like the notes from the throat of a bird, one phrase answering the other in exquisite melody.”  She was respected by many poets, writers, and critics, including our May Athenaeum Author, Edwin Percy Whipple, who wrote that Perry “is a poetess who is all alive with the spirit of sweet content and glee.  She sings as a bird sings, from an abounding, overflowing joy of heart.”  Perry also included in her circle of friends the Boston Osgoods, the Ticknor family, writer and journalist Arthur Warren, the poet Whittier, abolitionist and lawyer Wendall Phillips, and writer George William Curtis.  She was an incredibly loyal friend, and often went above and beyond when it came to helping friends.  Perry was also very close to her mother, whose death caused Perry intense feelings of grief and loneliness.

Perry was fiercely independent and opinionated, and was never shy about her strong likes and dislikes.  One friend surmised that it was perhaps this love of independence that caused her to remain unmarried.  It was known amongst her close friends, though, that she had many loving admirers, although “none of whom, however, satisfied her long, or, perhaps, ever really touched her heart.”

Perhaps Perry’s greatest gift was that of her own personal belief of charity in regards to encouragement and mentoring.  Of Ms. Perry, her friend Ms. Caroline Ticknor wrote: “Let one who associates with the word ‘charity’ the murmured thanks of some degenerate tramp, replace the mental picture with a thought of some inspiration derived by some discouraged young writer, from a few personal lines penned by an author who has already won a place in the inhospitable world of letter, and yet who pauses to say, ‘That was well done; you can do better still.  Go on.’”

The Ex-Editor (1896, May 16).  The Ex-Editor in New York: The veteran relates some of his experiences with Nora Perry.  Philadelphia Enquirer, pp. 6.

Gilman, A. (1879).  Poets’ homes: Pen and pencil sketches of American poets and their homes.  Boston: D. Lothrop and Company.