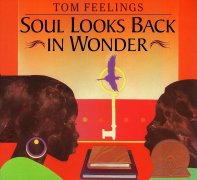 A collection of poems that celebrate the joy, beauty, imagination, and freedom of childhood.

Thirteen Moons on Turtle’s Back: A Native American Year of Moons by Joseph Burchac

(Children’s Library + PS3552.R794 T47 1992)
Celebrates the seasons of the year through poems from the legends of such Native American tribes as the Cherokee, Cree, and Sioux.

Artwork and poems by such writers as Maya Angelou, Langston Hughes, and Askia Toure portray the creativity, strength, and beauty of their African American heritage.

Lizards, Frogs, and Pollywogs: Poems and Paintings by Douglas Florian

A collection of humorous poems about such reptiles and amphibians as the glass frog, the gecko, and the rattlesnake.

Collects poems celebrating everyday activities, including drifting off to sleep, lying in the warm sun, and eating spaghetti for dinner.

“With personal introductions by former Children’s Poet Laureate Mary Ann Hoberman—as well as her own time-tested tips and tools for memorization and recitation—and vivid illustrations by Michael Emberley featuring his trademark wit and lively characters, Forget-Me-Nots includes more than 120 works from both classic and contemporary poets, from childhood favorites to lesser-known treasures.” —Provided by publisher

Inspired by Stephen Alcorn’s magnificent animal portraits, popular poet and noted anthologist Lee Bennett Hopkins commissioned thirteen poets to craft verses to match the eloquence of this art. The resulting celebration of art and nature captures the subtle intensity and striking textures of a renowned artist’s relief-block prints in a unique homage to the power, mystery, and beauty of the natural world.

” Are You An Echo? resurrects the work of Misuzu Kaneko and brings the gentle grace of her poems to a new generation.” —Provided by publisher

“Twenty-three poems capture the joys of reading from that thrilling moment when a child first learns to decipher words to the excitement that follows in reading everything from road signs to field guides to internet articles to stories. These poems also explore what reading does, lyrically celebrating how it opens minds, can make you kind, and allows you to explore the whole world.” —Provided by publisher

With My Hands: Poems About Making Things by Amy Ludwig VanDerwater

“The short and lively poems in this collection explore many different forms of creativity and the excitement and satisfaction that each one brings.” —Provided by publisher

“A collection of humorous poetry about naughty, ill-mannered, even cruel, boys and girls.” —Provided by publisher

The Poet Slave of Cuba: A Biography of Juan Francisco Manzo by Margarita Engle

Juan Francisco Manzano was born in 1797 into the household of wealthy slaveowners in Cuba. He spent his early years at the side of his owner’s wife, entertaining her friends. His poetry was his outlet, reflecting the beauty and cruelty of his world. Written in verse.

Seventy poems deal with the challenges of growing up, curious beasts and birds, city life, and other subjects both realistic and fanciful.

To The Moon and Back: A Collection of Poems by Nancy Larrick, illustrated by Catherine O’Neill

Sixty-six poems by dozens of English and American authors are full of rhythm and movement and suitable for reading aloud.

A Wreath For Emmett Till by Marilyn Nelson

“In a profound and chilling poem, award-winning poet Marilyn Nelson reminds us of the boy whose fate helped spark the civil rights movement. This martyr’s wreath, woven from a little known but sophisticated form of poetry, challenges us to speak out against modern-day injustices, to ‘speak what we see.’” —Provided by publisher

“There are 100 poems in this book by 100 poets who wrote their poems when they were in grades one through twelve. These poets are not famous. You have not read their poems before. These poets live anywhere. They are now dentists and dancers and teachers and students and construction workers. They write with fire. They could be you.” —Provided by publisher

The New Kid On The Block by Jack Prelutsky

Humorous poems about such strange creatures and people as Baloney Belly Billy and the Gloopy Gloopers.

Wet Cement: A Mix of Concrete Poems by Rob Raczka

(Children’s Library PS3618.A346 A6 2016)
“Who says words need to be concrete? This collection shapes poems in surprising and delightful ways. Concrete poetry is a perennially popular poetic form because they are fun to look at. But by using the arrangement of the words on the page to convey the meaning of the poem, concrete or shape poems are also easy to write!” —Provided by publisher

A collection of short poems with such titles as “I Can’t Move Mountains,” “Junkyard,” and “Greenhouse in March.”