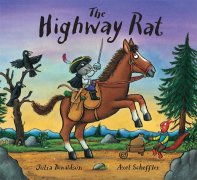 The Maid and the Mouse and the Odd-Shaped House: A Story in Rhyme by Paul O. Zelinsky

An oddly-shaped house takes on the appearance of a cat as the maid and mouse who live there make various changes in it.

The Lion and the Mouse by Jenny Broom; illustrated by Nahta Nój

“How can a humble little mouse save a great and mighty lion? Find out in this fresh retelling of one of Aesop’s most popular fables. Interactive artwork makes you the storyteller! Release the mouse from the lion’s claws and free the lion from his net simply by turning the page.” —Cover.

The Highway Rat by Julia Donaldson

A very bad rat rides his horse along the highway stealing travelers’ food, from a rabbit’s clover to a spider’s flies, until clever Duck introduces him to her “sister.”

A mouse trapped inside the pages of a book chews his way out and escapes to the countryside on a paper airplane.

A mouse trapped inside the pages of a book chews his way out to an ocean and sails away in a paper boat.

The Tooth Mouse by Susan Hood; illustrated by Janice Nadeau

Introduces readers to the Tooth Mouse, France’s version of the tooth fairy, and to Sophie, a sweet young mouse who must prove she is brave, honest and wise enough to take over this important job.

A visit to an art museum inspires a young mouse to become a painter.

Nicolas, Where Have You Been? by Leo Lionni

Mishap turns to adventure as a young mouse learns that all birds aren’t the enemies he thought they were.

The Mouse Mansion by Karina Schaapman

Best friends Sam and Julia love spending their days exploring the many rooms and secret hiding places of the Mouse Mansion, where they live with their families.

Katy Mouse teaches her younger brother, Tiny, the names of some of the things they see, including a boot, a snail, and a pheasant, when they go to the cornfield to play games.

Wilbur, a naked mole rat who likes to wear clothes, is forced to go before the wise community elder, who surprises the other naked mole rats with his pronouncement.

Retells in verse the Indian fable of the blind men discovering different parts of an elephant and arguing about its appearance. The illustrations depict the blind arguers as mice.

Little Rat overcomes her fear and learns to ride a horse, just like her daddy did when he was young.

With a little courage and a lot of practice, Little Rat overcomes her fear of sailing.

The Tale of Despereaux: Being the Story of a Mouse, a Princess, Some Soup, and a Spool of Thread by Kate DiCamillo; illustrated by Timothy Basil Ering

The adventures of Despereaux Tilling, a small mouse of unusual talents, the princess that he loves, the servant girl who longs to be a princess, and a devious rat determined to bring them all to ruin.

The Orphan and the Mouse by Martha Freeman; illustrated by David McPhail

In 1949 Philadephia, Mary Mouse and an orphan named Caro embark on an adventure when they team up to expose criminals and make the Cherry Street Orphanage a safe haven for mice.

The Mouse and his Child by Russell Hoban; illustrated by David Small

When the peaceful life of ancient Redwall Abbey is shattered by the arrival of the evil rat Cluny and his villainous hordes, Matthias, a young mouse, determines to find the legendary sword of Martin the Warrior which, he is convinced, will help Redwall’s inhabitants destroy the enemy.

Emmy and the Incredible Shrinking Rat by Lynne Jonell; illustrated by Jonathan Bean

When Emmy discovers that she and her formerly loving parents are being drugged by their evil nanny with rodent potions that can change people in frightening ways, she and some new friends must try everything possible to return things to normal.

Bless this Mouse by Lois Lowry; illustrated by Eric Rohmann.

Mouse Mistress Hildegarde musters all her ingenuity to keep a large colony of church mice safe from the exterminator and to see that they make it through the dangerous Blessing of the Animals.

The Infamous Ratsos by Kara LaReau; illustrated by Matt Myers

Rat brothers Louie and Ralphie Ratso try to prove they can be as rough and tough as their father in the Big City, but every time they try to show how tough they are, they end up accidentally doing good deeds instead.

“When Joey is bitten by a rat, he goes from aspiring seventh-grader to three-inch tall rodent, and unwittingly unlocks the sword Ratscalibur.” —Provided by publisher.

The Mouse of Amherst by Elizabeth Spires; illustrated by Claire Nivola

When she moves into Emily Dickinson’s bedroom, Emmaline the mouse discovers her own propensity for poetry.

Mrs. Frisby and the Rats of Nimh by Robert C. O’Brien; illustrated by Zena Bernstein

Having no one to help her with her problems, a widowed mouse visits the rats whose former imprisonment in a laboratory made them wise and long lived.

I Was a Rat! by Philip Pullman

A little boy turns life in London upside down when he appears at the house of a lonely old couple and insists he was a rat.

The Rescuers by Margery Sharp; illustrated by Garth Williams

Two enterprising mice live up to the motto of the Rescue Aid Society, “We help anyone … anywhere,” when they rescue a kidnapped orphan.

Eleven years after the cruel Killdeer took over the Catacombs far beneath the human’s Trillium City, Juniper Belancourt, assisted by Vincent and Victor Nightshade, leads a maverick band of rats to escape and establish their own city.

The adventures of the debonair mouse, Stuart Little, as he sets out in the world to seek out his dearest friend, a little bird who stayed a few days in his family’s garden.

There is never any room for Bonnie, the baby mouse, in the flower pot, so she goes looking for a new mouse house.

Half World by Hiromi Goto; illustrated by Jillian Tamaki

“Melanie Tamaki is an outsider. She is unpopular at school. At home, where she and her loving but neglectful mother live in poverty, she has had to learn to take care of herself. Melanie is just barely coping. Everything changes on the day she returns home to find her mother is missing, lured back to Half World by a nightmare creature calling himself Mr. Glueskin. Soon Melanie has embarked on an epic and darkly fantastical journey to Half World to save her mother. What she does not yet realize is that the state of the universe is at stake…” —Cover.

The Amazing Maurice and His Educated Rodents by Terry Pratchett

A talking cat, intelligent rats, and a strange boy cooperate in a Pied Piper scam until they try to con the wrong town and are confronted by a deadly evil rat king.

Oh, Rats!: The Story of Rats and People by Albert Marrin; illustrated by C.B. Mordan

Get ready to look at rats in a whole new way. These intelligent, compassionate creatures are greatly misunderstood.