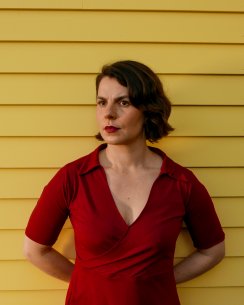 A recent resident of Boston, Sara Freeman grew up moving between her home in Montreal and several countries in Europe for her father’s job as a foreign correspondent. After an early career in law, Freeman decided to pursue her passion for writing and received her MFA in Fiction from Columbia University in 2013, where she won the Henfield Prize. Her debut novel, Tides, was called one of The Globe and Mail’s “most exciting of 2022” and Lithub’s “most anticipated books of 2022.” Visit her website to learn more.

Our conversation has been edited for brevity and clarity.

Q: Where did you grow up? Where do you call home now?

SARA FREEMAN: I was born in Montreal, and I grew up between Canada and Europe. My dad was a foreign correspondent for a Canadian newspaper, and we were posted to Berlin when I was ten. I lived there and then in London as a teenager, and then subsequently came back to North America for university. I have been living in Boston for the past five years now. And yet, in many ways, after all this moving around, I still consider Montreal my home.

Q: Where did you study in the United States?

SF: I first went to McGill for undergrad, where I studied history and Hispanic studies. The Hispanic studies program was mostly literature-focused, so that’s where I got most of my literary education. A few years after that, I went to do an MFA in fiction at Columbia. I was in New York for seven years before moving here.

Q: Did you have a particular class that was really interesting or impactful?

SF: For me, the first and most important moment was finding a creative writing workshop in my undergrad. I took a poetry workshop my final semester with an American poet called Thomas Heise. And it was the first time that I was in a group of other writers. Up until then, I had mostly written privately and probably not very well. It was really nice to be with other people who seemed to be as excited about each small word choice as I was. I started to think, “Oh, maybe I can do this, I could have a life as a writer.” But it also felt like there had to be a community around it. I didn’t know how to do it by myself. So those classes, those first workshops, were really meaningful to me.

Q: Was that the moment you decided on your career, or were there other stops along the way?

SF: Definitely other stops along the way. After I graduated from university, I worked in a human rights and housing rights law firm in London. I read a lot of affidavits and case reports, and found I was much more interested in people’s stories than in litigating. I went through a bit of a crisis about this and enrolled in continuing education classes in creative writing and English literature. I realized that I did want to pursue writing as my job. I had to confess to my family, “I’m not going to be a lawyer. I can’t do it. I’m sorry.” And then I started thinking about the possibility of an MFA. I really wanted that formal training.

Q: And maybe the community aspect as well?

SF: Definitely. Having graduated from Columbia’s MFA program over ten years ago, I still rely on a lot of the people I met there as readers. Even if I don’t see them very often, the network is still there.

Q: Have the writers in your network been published as well?

SF: Interestingly enough, I’m one of the late bloomers in the class. It took me nearly a decade after I graduated to get a book published. A lot of my classmates were published almost immediately after the program ended or within a couple of years. I had a few false starts, which is part of the story of Tides.

Q: What a great segue. Please tell me about Tides.

SF: As I was finishing my MFA, I started working on a novel, which was set in Montreal in the 70s. It was an ambitious, multi-generational social novel. Which is very different from what Tides ended up being. I worked on this first novel for at least three years. In the end, it didn’t coalesce. I felt a real sense that it had, at least artistically speaking, failed. I had to put it aside and mourn this project I had invested so much time in.

When I got the courage to start up again, I knew that I wanted to write a much smaller and more intimate novel, a novel with a single character that I was following closely for a short period of time in a very heightened psychological circumstance. I had a sense that those constraints would allow me to finally write a novel that worked. But as these things go, the first draft also had many of the same issues I had encountered in my previous novel. There were moments that were really compelling, but the cohesion still wasn’t there, the form I’d chosen didn’t quite hold the narrative together.

I decided to put the draft aside for a couple months, and then I reread it and found a few sentences—truly, just a dozen or so sentences—where there was an atmosphere that I found moving and intriguing. I remember going to the fifth floor of the Athenæum and opening a new document, trying to follow the line of those particular sentences, their atmosphere. That is how the final form of Tides emerged, with its condensed passages with a lot of white space around them. The final draft is very different from the first draft, almost unrecognizably different. That initial moment of surprise, of finding this new way to tell this story, and the unfamiliar rhythm of the language, was so wonderful. Before this moment, I hadn’t ever felt that the process was pulling me rather than me pushing up against the process. So that was a moment of real elation, and also terror, because I’d never done anything like it before.

Q: How long did it take to go from leaving behind that first project to finding your way through this new project?

SF: The first draft took me six or seven months. I pause a lot while I’m writing because I like to de-familiarize myself with the material in order to see what’s alive in it. With Tides, I took a few months off of writing before re-reading my first draft, and then came this energetic burst of rewriting, which was pretty quick, only a few months long. I had packed in so much energy around it and built up so much anticipation in the waiting, that it felt like the project had its own engine.

Q: Are you thinking about any projects in the future?

SF: Yes, I am beginning to think about a new novel. It’s funny, I do wonder if this experience of such radical revision, which I experienced with Tides, will happen every time. I started playing around with something new recently, and it’s very different, in scope and style. It’s more of a developed social world, with more characters in it, and it’s far less internal. But I don’t yet know what its shape will be. I don’t yet hear it very well either. I’m still really feeling around for what it is. So, who knows, maybe I’ll have another moment on the fifth floor.

Q: What originally brought you to the Athenæum?

SF: My husband and I have a very close friend whose father has been a member for years and years. When we moved to Boston for my husband’s graduate school, it was one of the first places that we came to visit. I wanted to know if there was a place where I could write. When I lived in New York, I was part of a writers’ room, which I had come to rely on for my writing practice. I remember coming here and thinking, “This is certainly somewhere where I can write.” My husband’s an architect so he was blown away by the stacks and particularly thrilled by the glass floors. We were immediately won over by the atmosphere of the place. And the beauty.

Q: I always like to ask about hidden gems in the Athenæum. Have you found any you’d be willing to share?

SF: Well, the thing is, I feel very, very protective of my hidden gem. There is a particular table somewhere in the Athenæum that I love, but I’m not going to tell where it is. The incredible thing about this particular spot was that at important moments when I was writing or rewriting and really needed full solitude, that table, every time I arrived, was empty. It was waiting for me. And I haven’t really visited it too much since then because I’m a bit superstitious about it, because it is just so perfect. It’s like the Muses wait for you there.