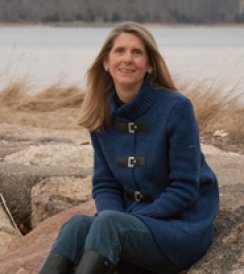 Children’s author Sara Hunter was born in Dover, MA, to John (“Jack”) and Sara (“Sally”) Ray Hoagland. She describes her young self as the “bossy” tomboy older sister who both devised and led the neighborhood children in all manner of shenanigans, typically inspired by the books she consumed by the dozens. Hunter remembers Dover as one of those old fashioned towns where the children weren’t allowed inside before dinner—so entertainment was key. Sure, there was always ice skating and other games, but with Hunter as ring leader, there were also plays and tests of bravery. There were even investigative adventures based upon Nancy Drew novels. One day, she and the local children broke into an unsuspecting neighbor’s shed, carried away by the plot of The Bungalow Mystery. The grown-ups were not nearly as amused as the children.

Hunter credits her first grade teacher, Mrs. Quinlan, with her dramatic introduction to the magic of books. Through her teacher’s recommendations, Hunter became enthralled with the power of a book to transport her into a completely different world.  A children’s biography series introduced her to Thomas Edison. She then convinced her parents to purchase her a chemistry set, and inspired by his biography, dutifully tore all of the labels off the chemical jars and replaced them with images of skulls and crossbones.  She had moments of reckoning with her book characters though. Running away from home with her favorite belongings attached to a stick and a thermos of stolen coffee to emulate Tom Sawyer and Huck Finn, turned out to be neither as fun, nor as delicious, as Mark Twain made it seem.

Hunter enrolled at Dartmouth College in 1972—the first year of coeducation. Soon after graduation, she began working at Christian Science Monitor, first in Boston, then in New York. A few years later, she returned to Dover to teach high school English and reading skills. Thus, she was able to experience the peculiar pleasure of calling her former teachers by their first names and assigning homework to her friends’ younger siblings. She recalls that some of her most rewarding work during that time was teaching public speaking. During these sessions, she saw many students shine who didn’t normally excel at academics; these were students who were outgoing and funny among their friends but had difficulty consuming and analyzing texts. This observation prompted her to enroll in Harvard’s graduate program for reading and reading disabilities, where she studied with Dr. Jeanne Chall.

In the years following graduation, she married Andy Hunter, adopted two children, directed a documentary about the adoption process, and began teaching part time in childhood enrichment programs. When her children entered grade school, she began working in earnest on three different children’s books.  Her first book was part of an Easy-to-Read series, featuring “Sesame Street” characters. Her young daughter was a great help, telling her when a word was too hard for the book. Hunter remembers being incredibly nervous while pitching the story across the enormous conference table at Jim Henson headquarters in Manhattan. In order to stay calm, she made sure to stare at the life size portrait of Kermit dressed as Gainsborough’s “The Blue Boy” almost the entire time. During her children’s elementary school years, she was also writing scripts, parodies and other story books for Warner Bros., Looney Tunes, and Nickelodeon.

Hearkening back to her early fascination with books like Ursula Nordstrom’s The Secret Language and Clifford B. Hicks’ Alvin’s Secret Code, Hunter decided to write a story acknowledging the little known Navajo code talkers of World War II. The Unbreakable Code (illustrated by Julia Miner) was published in 1996 and won many awards, including the Smithsonian magazine Notable Children’s Book of the Year. To this day, she is still visiting elementary schools to discuss this book and experiment with code games. Her next picture book, The Lighthouse Santa, was based on the real life Edward Rowe Snow. Also known as “The Flying Santa,” Snow was a magical presence in the lives of lighthouse families who looked forward to his present-dropping flights for over forty years. Hunter read from this book at the Boston Athenæum in 2011. Her forthcoming Every Turtle Counts, illustrated by Susan Spellman, tells the story of the rare species of turtle that washes ashore each year on the shores of Cape Cod and the dedicated residents who undertake the task of rescuing them. The main character is based on Hunter’s niece, a great animal lover who happens to be autistic.

When asked what authors she might turn to for inspiration, Hunter praises Horton Foote’s ability to capture a small town, E.B. White “for clarity, tenderness and speaking to the heart,” and Louisa May Alcott for the tales of family to which she aspires. (As a child, she remembers being enchanted with Alcott’s writing desk with a view to Walden Pond and is pleased to report that she’s been able to position her current writing desk with a similar orientation). She also admires Ralph Waldo Emerson for ideas, Kate DiCamillo and Sherman Alexie for contemporary children’s fiction, and Keven Henkes for picture books. She enjoys Henry Beston and Sarah Orne Jewett for their descriptions of nature.  She recently read and loved John Kennedy Toole’s A Confederacy of Dunces and is re-reading an old favorite, Watership Down by Richard Adams.

Hunter enjoys reading, writing, and sharing her work at the Boston Athenæum because of the “inspiring aura of rich history, all around.” She is scheduled to visit and share her thoughts on Every Turtle Counts in the autumn of 2014.