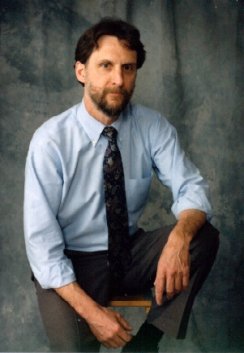 You’ve seen Scott Guthery at the Athenæum before. You know him from the Mathematics, Technology, and Society discussion group, which he leads, as well as the newly-formed Athenæum Encyclopӕdists, which he also leads. You’ve taken one of the art and architecture tours offered every Tuesday and Thursday at 3:00 p.m. and Scott was the docent on duty, enthusiastically expounding upon the many wonderful pieces of art in our collection, peppering his stories with points of mathematical interest. You’ve bumped into him while you’re both getting happily lost in the Lower Pilgrim stacks—which, incidentally, is how the math group was formed. If nothing else, you’ve seen him working in an alcove on the second floor. He’s a fixture.

As a young man growing up in Cleveland, Ohio, Scott spent much of his time learning about computer programming and discovered it is concentric with mathematics. The designs of both studies are ordered by hierarchy, i.e., the approach to and execution of programming a computer and solving a math problem are essentially the same, so an understanding of mathematics is helpful when programming computers.

His burgeoning curiosity in technology aside, Scott’s academic goal at first was to become a medical doctor. To that end he began his undergraduate study of medicine at Colgate University in 1959. But a lifelong interest in mathematics proved too integral to be denied. After two years he decided to finish up his undergraduate work at Miami University of Ohio, securing his degree in mathematics. In 1966 he earned his master’s; his Ph.D he acquired soon after at Michigan State.

Recently Scott and I sat down for a chat in the back nook near Conservation. I wanted to get some basic information about his personal history and his background in math. What I got was a lovely conversation with a smart, spirited, and curious man. Scott was generous enough to share even more thoughts over email. Below is the distilled essence of these talks.

Q: When and how did you wind up in Boston?

SG: I moved from Austin, Texas in 1999 to co-found a mobile network applications business called Mobile-Mind. I moved to Boston since getting a start-up running from two locations is difficult at best.

[Scott discovered the Athenæum in 2011 when the Ticknor Society organized a special tour for book collectors. Scott signed up for the in-depth tour, which included curator presentations about special features of the collection. Not surprisingly, he was sold with that first look. Within a year of establishing membership he answered the Athenæum’s call for new docents. Any excuse to spend time at 10 1/2 Beacon.]

Q: Toward what area of mathematics are you most compelled?

[In line with this approach, Scott published A Motif of Mathematics: History and Application of the Mediant and the Farey Sequence, in 2010.]

Q: What is A Motif about?

John Farey was a British geologist who published a short letter in the May 1816 issue of Tilloch’s Philosophical Magazine and Journal inquiring about a mathematical property of the sequence. He has ever since been taken to task in the mathematics literature for stealing the insight from “somebody named Haros” so I decided to write a a book about Haros. As it turns out, it was a lion of French mathematics and a colleague of Charles Haros, Augustin-Louis Cauchy, who misnamed the sequence after Farey. See Stigler’s Law of Eponymy: No scientific discovery is named after its original discoverer. By the way, Stigler’s law was first recognized by Robert Merton so it is an example of itself.

[Scott’s not just being funny. Though it’s unclear to me whether Stigler’s Law is truly, serendipitously an example of itself or whether Stigler exercised a little dramatic license—after all, who says math types can’t be creative? More on that later.]

Q: When/how/why did you decide to start your own press?

SG: Mobile-Mind was acquired by a telecom company in 2006. I stayed with the buyer for a while and then was recruited to build cryptography and digital security products for a global technology company. But once you get the start-up bug and work for yourself it’s really hard to go back to working in a big hierarchical organization. So I left in 2009 and started Docent Press.

Q: Any projects on the horizon?

SG: The book I’m currently working on, Readers at the Boston Athenæum (1827–1850), is centered on the Athenæum’s books borrowed registers. The first four volumes of the register have been digitized and contain 122,020 charge records of 705 individuals. As my background is mathematics, I started by writing a chapter about all the Athenæum readers who borrowed at least one mathematics book. There were 44 of them. Another chapter is about all the readers that held at least one US patent. There are 15 of them and as a group they held 67 patents with the leader being Erastus Bigelow of Bigelow carpet fame, who held 20. I’m currently working on a chapter about John Guardenier, a four-time Athenæum proprietor and prodigious Boston book binder who bound hundreds of books for the Athenæum and who paid for his shares in kind. Guardenier generated 393 entries in the four registers, borrowing some 227 titles.

One of my favorite stories coming out of my work with the Athenæum’s Books Borrowed registers is about the Josiah Parsons Cookes, Sr. and Jr. Josiah Parsons Cooke, Sr., was an Athenæum proprietor and a widely-respected Boston lawyer. Josiah Parsons Cooke, Jr. was “the first university chemist to do truly distinguished work in the field of chemistry” in the United States. An apocryphal story about Jr. is that his interest in chemistry was sparked by reading Edward Turner’s Elements of Chemistry. Sure enough, consulting the books borrowed register we find that on June 17, 1842, Sr. borrowed “Terners [sic] Chemistry.” Jr. was 15 years old at the time. Not only is Turner’s book still on the shelf at the Athenæum but I like to imagine that it is the very copy that was borrowed by Sr. and started the illustrious career of Jr.”

[Scott’s enthusiasm is contagious. With this anecdote in mind I dashed to the shelves to pull the signature card from Turner’s book; my hopes, in turn, were dashed when the card wasn’t there. However: at the end of that same shelf is Cooke Jr.’s Elements of Chemical Physics. The checking out of one book led to the publishing of a book not ten inches down the row 32 years later. This is the stuff of chills.]

Q: What is the future of mathematics? What avenues are mathematicians exploring today? Where are their discoveries leading us?

[Scott stresses more than once (primarily due to my obtuseness) the idea that today’s findings encapsulate everything previously discovered. One finds the sum total of information on a topic to be the most generalized and abstract, which ultimately may prove unhelpful to somebody looking for solutions to a real-world problem. “Mathematics is not a discipline that appreciates its own history,” Scott notes. To a mathematician, today’s findings are the most inclusive, so why bother tracing the history? That Scott rejects this way of thinking is refreshing and heartening. He mentions how great the Athenæum’s de-acquisition policy is: that there is no de-acquisition. Once we’ve obtained a book we hold onto it, ensuring an expansive, alive collection.]

[There is also the notion of creativity in mathematics. Scott asserts there are many very bright people applying mathematics in creative ways in order to solve practical problems; the example he gives is of Oliver Evans, the inventor of the automated grist mill, trying to determine the minimum amount of resources and correct conditions needed to yield the greatest output. Mathematicians who discount yesterday’s techniques (which are simple in presentation and more readily understood) applied today’s findings (abstract, more abstruse) and arrived at an answer mill builders intuited was insufficient. The mill builders themselves applied some more fundamental ideas and yielded more profitable results. If the future of mathematics is uncertain, it’s because we are getting mired in the abstract rather than re-appropriating what we already know in new and innovative ways.]

Suppose then that the rate of change in all directions goes to zero; that despite their best and most strenuous efforts, research mathematicians cannot budge the horizon between past and future; that we know all the mathematics we can know and will ever know. There are certainly mathematical lines of investigation that have reached this impasse. Why not the entire field?

[Our conversation ends because Scott has to run upstairs to the Athenæum Encyclopӕdists meeting that begins in minutes. Before we part ways, though, he takes me down to Lower Pilgrim to show off the math section. Cutter H. I watch him pulling the books down from the shelves and admiring them. There is love and attention and reverence in his fingers and in his voice. Each book is tactile history, weighty but within reach.]

A Motif of Mathematics: History and Application of the Mediant and the Farey Sequence

Cohen, I. Bernard (1959). “Some Reflections on the State of Science in America During the Nineteenth Century”.

Guthery, Scott B. A Motif of Mathematics: History and Application of the Mediant and the Farey Sequence. Boston: Docent Press, 2010.