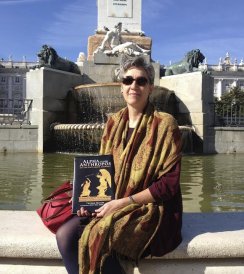 Therese Sellers is the author of Alpha is for Anthropos, a collection of Greek nursery rhymes she composed over seventeen years teaching Ancient Greek to children. Her sister, Lucy Bell Jarka-Sellers, is the book’s illustrator. Born in Philadelphia to Peter and Lucy Bell Sellers, Sellers describes herself as “Greek by affection, if not by birth.” She’s unsure whether this affinity is due to the layover her parents made in Athens while on their way to a two-year stay in Kenya she was only six months old, the time her father, a mathematician, spent teaching her Greek letters on index cards, or to the entire year her fourth grade class spent studying Ancient Greece. Nevertheless, her passion for Athena’s homeland has never waned.

As a freshman at Germantown Friends School, she was the youngest student in the newly instituted Ancient Greek course. By the time she enrolled at Harvard at age 17, she already had four years of Greek and immediately enrolled in upper level courses. While she was excited and inspired by Greek literature, she never felt completely at home in the world of academia and has spent her career finding different ways to take Ancient Greek out a purely academic setting. She did this in her undergraduate years with an outdoor production of Euripides’ Bacchae performed in the Harvard football stadium with all the choral odes in the original Greek.

Teaching Greek to children was another departure from upper-level classical studies and was the inspiration for Alpha is for Anthropos, which invites readers, young and old, to engage with the book of various levels of character formation, art and design, mythology and song. Sellers attributes this endeavor to a strange request made by a college friend almost two decades ago: to teach her four-year-old son Ancient Greek. True, she had surrounded herself with Greek culture ever since she was cast as Antigone at age nine, even moving to Greece for three years in her twenties and building a house there. But to teach a small child Ancient Greek? The task still seemed Herculean. During their first meetings, the boy wouldn’t remember anything they’d covered from one week to the next and Sellers began to wonder if it was all a waste of time. But suddenly, she decided to change her teaching style entirely. Instead of working with paper, they took walks. When they came upon an oak tree, she gave him the word for oak and told him a related story about Zeus. They started singing the alphabet and phrases to the tune of familiar songs and nursery rhymes. They drew in the dirt. They chalked the sidewalks. And then an amazing thing started to happen: this young boy was learning Ancient Greek, and quickly. Families in her neighborhood got wind of the fun, and she soon was teaching Greek to whole groups of preschoolers. When she offered to bring her Greek curriculum to Glen Urquhart School in Beverly, they also hired her to run their Latin program.

After seven years in the classroom, Sellers decided to leave teaching to become a full-time writer. Alpha is for Anthropos is her first book. On the horizon is a biography of Eva Palmer-Sikelianos (1874-1952) whom Sellers researched while living in Greece as a young woman. She’s also revising a novel that began as a NaNoWriMo challenge during her last year of teaching, and in the publishing process for a novel she translated as a part of her PhD, Aioliki Yi by Ilias Venezis. When her family realized that there was no way she could get any writing done at their busy city apartment, they gave her a Boston Athenæum membership, enabling her to do her writing in the quiet fifth floor reading room which she describes as “heaven” in comparison. Here, she can work amid books, statues and architectural details that bring her right back to Greece. Once in awhile, she’ll even depart from the classics to review the work of long ago Boston Athenæum member, Sarah Orne Jewett, or to write and tweet haiku at @qerese. In January 2014, Sellers presented Alpha is for Anthropos at the Boston Athenæum to a diverse group of parents, children, and Classics enthusiasts from around the world. After thanking Athena for presiding over them, she shared her book, the myth of Arachne and Athena, the riddle of the Sphinx, slices of Greek New Year’s Day cake, and most importantly, her belief that teaching is done most effectively “with joy and beauty.”