Home » Blog » Women Who Made History

Women Who Made History 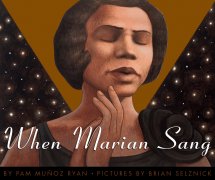 Librarian’s Note: I hope that this list can serve as a starting point for learning about the accomplishments of women throughout history, but let me be clear: this list is not an especially good one. It includes some amazing books about some amazing women, but it’s also full of gaps. Where are all the latina women? The Asian women? The Middle Eastern women? The trans women? I could go on. There are so many ways of being an influential, history-making woman that just aren’t represented here, and these absences are a disservice to all of us. Some of these gaps are the product of larger forces in children’s book publishing and our society, but many can and will be filled through future book purchasing. Here, for now, is the best of what we have. I hope you’ll enjoy sharing these books with the children in your life.

An introduction to the life of Marian Anderson, extraordinary singer and civil rights activist, who was the first African American to perform at the Metropolitan Opera, whose life and career encouraged social change.

Introduces the life of Nellie Bly who, as a “stunt reporter” for the New York World newspaper in the late 1800s, championed women’s rights and traveled around the world faster than anyone ever had.

“On December 21, 1848, Ellen Craft slipped out into the cold, dark night and took her first steps toward freedom. Ellen and her husband, William, had a daring plan to escape from slavery. Posing as a white man, Ellen hoped to travel north as William’s slave master. If anyone discovered her, she’d be severely punished. But Ellen was willing to risk everything—even death—to be free.” —provided by the publisher

Ella Fitzgerald: The Tale of a Vocal Virtuosa by Andrea Davis Pinkney; illustrated by Brian Pinkney

A brief recounting of the career of this jazz musician in the voice of “Scat Cat Monroe.”

“William Miller presents a lyrical account of a little-known episode in the childhood of the renowned writer Zora Neale Hurston. This inspirational story will appeal to all readers who, like Zora, believe in their dreams.” —provided by the publisher

“Rosa Parks is one of the most famous figures in American history. On December 1, 1955, she got on a Montgomery, Alabama city bus after work and refused to give up her seat to a white man, an act that sparked a revolution.” —provided by the publisher

They Called Her Molly Pitcher by Anne Rockwell; illustrated by Cynthia von Buhler

A Voice of Her Own: The Story of Phillis Wheatley , Slave Poet by Kathryn Lasky; illustrated by Paul Lee

A biography of an African girl brought to New England as a slave in 1761 who became famous on both sides of the Atlantic as the first Black poet in America.

Beatrix: Various Episodes from the Life of Beatrix Potter by Jeanette Winter

This simple biography of Beatrix Potter, best known for writing The Tale of Peter Rabbit, includes excerpts from her published letters and journals and reveals why she drew and wrote about animals.

“Louise spent her childhood in France as an apprentice to her mother before she became a tapestry artist herself. She worked with fabric throughout her career, and this biographical picture book shows how Bourgeois’s childhood experiences weaving with her loving, nurturing mother provided the inspiration for her most famous works. With a beautifully nuanced and poetic story, this book stunningly captures the relationship between mother and daughter and illuminates how memories are woven into us all.” —provided by the publisher

“From adventurer Amelia Earhart to computer pioneer Grace Hopper to novelist Zora Neale Hurston, discover women who have made a difference in people’s lives.” —provided by the publisher

Rad American Women: A to Z by Kate Schatz; illustrated by Megan Halsey and Sean Addy

“Profiled are 26 American women from the 18th through 21st centuries, who have made-or are still making–history as artists, writers, teachers, lawyers, or athletes. The women come from a variety of economic and ethnic backgrounds and many had to overcome extreme hardships. One woman represents each alphabetical letter beginning with Angela Davis, an activist, teacher, and writer, and concludes with Zora Neale Hurston, an anthropologist and writer” — Provided by publisher.

A portrait of the passionate performer and civil rights advocate Josephine Baker, the woman who worked her way from the slums of St. Louis to the grandest stages in the world.

Beautiful Warrior: The Legend of the Nun’s Kung Fu by Emily Arnold McCully

Tells the story of two unlikely kung fu masters and how their skill in martial arts saves them both.

Follows a girl in the 1920s as she strives to become a drummer, despite being continually reminded that only boys play the drums, and that there has never been a female drummer in Cuba. Includes note about Millo Castro Zaldarriaga, who inspired the story, and Anacaona, the all-girl dance band she formed with her sisters.

Young Oney Judge risks everything to escape a life of slavery in the household of George and Martha Washington and to make her own way as a free black woman.

Red Butterfly: How a Princess Smuggled the Secret of Silk Out of China by Deborah Noyes; illustrated by Sophie Blackall

In long-ago China, as a young princess prepares to leave her parents’ kingdom to travel to far-off Khotan where she is to marry the king, she decides to surreptitiously take with her a precious reminder of home.

Aunt Harriet’s Underground Railroad in the Sky by Faith Ringgold

With Harriet Tubman as her guide, Cassie retraces the steps escaping slaves took on the Underground Railroad in order to reunite with her younger brother.

About the childhood of Frida Kahlo and how it influenced her art.

Biography of one of the first young activists to resist bus segregation in Montgomery, Alabama.

Amelia Lost: The Life and Disappearance of Amelia Earhart by Candace Fleming

Tells the story of Amelia Earhart’s life—as a child, a woman, and a pilot—and describes the search for her missing plane.

A biography of an American writer active in early women’s rights activities and prominent in the transcendentalist movement of the early 1800’s.

The World at Her Fingertips: The Story of Helen Keller by Joan Dash

Woman Against Slavery: The Story of Harriet Beecher Stowe by Anthony Scott

Biography of the author and abolitionist.

Only Passing Through: The Story of Sojourner Truth by Anne Rockwell; illustrated by R. Gregory Christie

Biography of the abolitionist and women’s rights activist.

Covers the personal life and literary career of the Canadian writer best known for her novels about Anne, a girl from Prince Edward Island.

The Bronte Sisters: The Brief Lives of Charlotte, Emily, and Anne by Catherine Reef

“The Bronte sisters were the most extraordinary of literary siblings. In the nineteenth century, when women were discouraged from writing and publishing books, all three produced one or more novels now considered masterpieces.” —provided by the publisher

Untamed: The Wild Life of Jane Goodall by Anita Silvey

“This biography for children will trace Goodall’s life, but each chapter will also focus on two or more the chimpanzees that she observed, with information in sidebars about these particular animals. Along with biographical details, the book will explore the ethical issues that surround Goodall’s work and show what has changed in our understanding of Great Apes. What do we know today about these animals in terms of language, speech, tool use, and DNA? How has sophisticated technology—GPS systems, Satellite imagery, portable digital microphones—been used to gain new information about animal populations.” —provided by the publisher

Joan of Arc by Diane Stanley

A biography of the fifteenth-century peasant girl who led a French army to victory against the English and was burned at the stake for witchcraft.

Women of Hope: African Americans Who Made a Difference by Joyce Hansen

With Courage and Cloth: Winning the Fight for a Woman’s Right to Vote by Ann Bausum

Recounts the story of the fight for women’s suffrage with particular focus on the efforts of Alice Paul.